The Top 10 Tapas Dishes You Have To Try In Spain 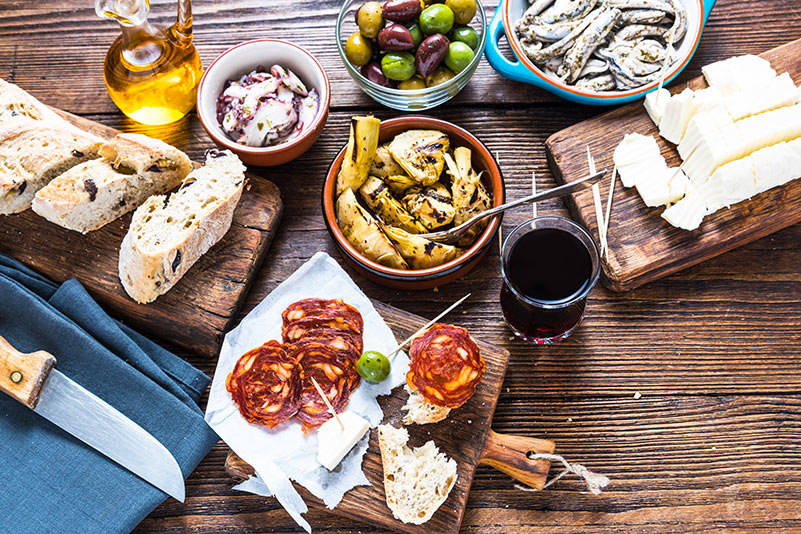 An essential ingredient to Spain's world famous culinary culture, tapas is a must try when visiting the illustrious country. Spain's larger cities are packed with vibrant bars and restaurants, and whilst the popular cuisine wont be hard to come by, deciding what to choose may prove difficult! Don't be surprised if you find yourself captivated by the many dishes being whizzed around you, filling the air with rich and enticing aromas. Here are our top 9 tapas dishes you simply MUST try when you're on your next villa holiday in Spain...

One of Spain's most quintessential tapas dishes, Jamon Serrano is a delicious cured, dried meat, salted and aged for the perfect texture and colour.

Boquerones en vinagre is a succulent appetizer, which can be found in every part of Spain. Boquerones translates to fresh anchovies, which is the essential ingredient to the dish. The tiny fish are marinated in a bath of salt water for 3 hours and then submerged in vinegar for a further 6 hours, you can watch as the fillets slowly turn white, their scales reacting with the vinegar. They are then drained and seasoned with garlic, salt and parsley. This dish is generally served with beer, rather than wine, because of the amount of vinegar used to make the dish and they are very popular, particularly in the summer months.

A popular tapas dish found on every menu, the egg and potato omelette is light and tasty, served sliced, cubed or as a whole piece.

Most often braised in a rich, spiced tomato sauce, these pork and beef meatballs are a tapas favourite with a combination of fragrant aromas that are bound to make your mouth water.

This is a traditional and popular dish in Galicia, in the north. It’s a meal many eat, while walking the pilgrimage to the Santiago de Compostela. The octopus is boiled in a copper cauldron, the tentacles are then trimmed with scissors, then sprinkled with coarse salt and paprika and traditionally served on a wooden plate, with sliced boiled potatoes and bread. This dish is far more popular in the Galician region than on the coast, because of this frozen or dried octopus is normally used, instead of fresh.

Patatas bravas, one of the most beloved tapas dishes served in Spain and it’s particularly popular in Britain. The potatoes are boiled in salted water for several minutes, they are then deep fried and ready for the iconic sauce, prepared differently in each city. In Burgos, they use a mix of spices, which is added to the tomato-based sauce and in Valencia it’s mixed with paprika, olive oil and chilli. This dish is commonly served throughout bars and restaurants and can be ordered with extra toppings such as chorizo, fried fish or baked chicken.

Made with a thick bechamel base and flavoured with ham, shrimp or cheese - prepare for a lovely crispy exterior and a rich, soft inside.

Las gambas al ajillo, or garlic prawns, is a very popular dish. You can find them mostly in central and southern Spain. This dish is usually served as a snack in bars, while people are drinking. But the dish has become so popular some restaurants now offer it as a main course. The prawns are usually cooked in a clay pot, they are fried with garlic and parsley in olive oil and sometimes slices of dried chilli. They are then served in the clay pot, while the olive oil is still sizzling and eaten quickly with a glass of white or red wine.

This dish is traditionally served on Fridays during Lent in Spain, because of the religious holiday forbidding meat during this period. However now you can find it throughout the year. It’s sometimes referred to by its ingredients ‘Potaje de Bacalao con Garbanzos y Espinasa,’ which translates to cod with chickpeas and spinach. The main ingredient fo the dish is the mouth-watering cod. To prepare the dish it must be submerged in salt for at least a day beforehand and then the chickpeas and white beans are added, then spinach, onion, garlic, oil and paprika.

Are your taste-buds tingeling? Let us know your favourite Spanish tapas dishes in the comments below!