A great many of you will have ventured to Spain at some time or another, and why not? With its warm climate and sandy beaches and fabulous food, there isn’t much not to like! Of course, we bet that the vast majority of you will have stuck to the southern, well-known areas, Malaga, Ronda, Granada and the like. Now we aren’t saying don’t go there, goodness no, but we are saying there’s a whole other side of the coin and that’s northern Spain.

Oh yes, that lesser-known little sister of the south.

So is this the year you take a step into the great unknown?

We know what you’re thinking: but what if it isn’t so good? What if there’s a reason it’s not so well known? What if it’s, in fact, the home of horror holidays?

Well before you race away to double check your tickets are for the south of Spain, why not take a tour of some of the highlights of the north with us?

You might just find that the great unknown is more like a great wonderous secret, just waiting for you to discover. 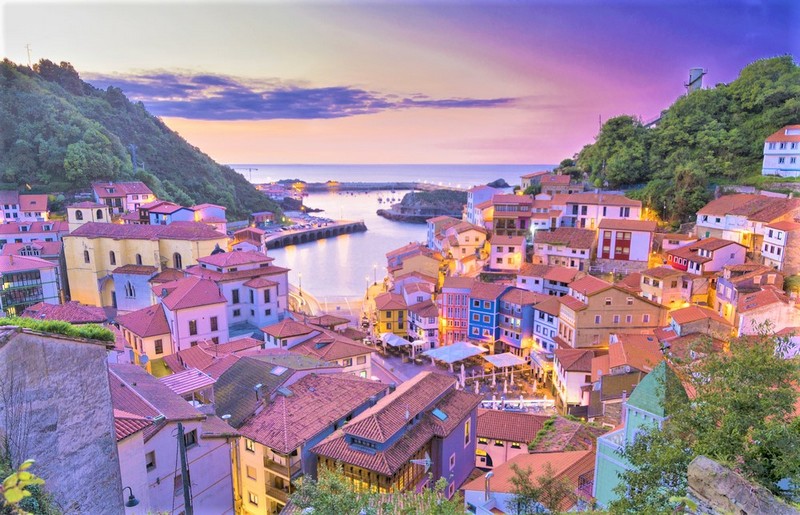 Now be honest, how many of you have even heard of Asturias? This stunningly beautiful region of northwest Spain is full of a lushness often missing in the hotter south, so much so that it’s sometimes colloquially referred to as ‘green Spain’. From meadows and rivers to majestic mountainous peaks, this side of Spain feels like another world, one lightyears away from the sandy shores we’re all more familiar with. It’s an endless source of wonder for anyone who finds themselves mesmerized by the spectacular beauty of nature and if you like walking and hiking then you’d be hard pushed to find a more breath-taking place in which to do it in.

The culture too is one that deviates from the Spain we all know, here, tourism isn’t catered to in quite the same way and because of this, you get to experience an authentic slice of the country that can sometimes become lost elsewhere. Speaking English is certainly rarer in this part of the country and you’ll find much less tourist orientated events, but this isn’t something to balk at, on the contrary, it’s to be reveled in!

One of the best places to explore in this region would be Oviedo, the capital of Asturias. Though it’s a fairly small place, it’s packed with cultural delights like museums and art galleries as well as some truly note-worthy architecture. Perhaps one of the best examples of this is the gothic-looking Catedral de San Salvador, which was built in the 14th century. Steeped in history and utterly breath-taking to stand at the foot of, you’ll find there’s a whole host of tales surrounding it if you venture in.

Another must-see in Oviedo is the Archaeological Museum of Asturias, which offers three floors of archaeological items discovered within the region, from pre-history all the way up to the modern day. The building it’s all housed in isn’t exactly insignificant either, it dates back to the 16th century and is intrinsically linked with Friar Benito Feijóo, who while living there (in its former Benedictine Monastery of San Vicente days), completed the majority of his writings. If you want to find the historical heart of Oviedo, nothing beats louder than this wonderful museum.

In among the culture and beauty though, you’ll find the smaller wonders of delightful restaurants and shops. The Fontán Market which is Oviedo’s main market is certainly somewhere you’ll want to stop by if you’re looking to get some great food like fresh meats and vegetables, while elsewhere you’ll find plenty of local places to hear live music and have a beer while you do so!

Ah León, another little-known fish in the sea of Spain. Nestled among the hallmark lushness of northern Spain, the city itself is beautiful to behold with some of the most staggering architecture you’ll find in the area. In fact, if architecture is your passion then we don’t so much suggest a visit here but demand it, we guarantee you won’t be disappointed. From the ornately gothic cathedrals to the narrow winding streets and wide-open squares, it’s one of the most delightful assaults on the senses you’ll have.

If you go and explore you’ll find some key places to visit, one of the best being the Santa María de León Cathedral, better known perhaps as the House of Light. It’s one of the most beautifully designed structures ever and has stood since the 13th century, looking more like something from a fairy-tale than something born of history. Inside, the fantastical beauty continues, as you’ll find some of the oldest choir stalls in all of Spain (carved from walnut by Flemish artists in the 15th century) as well as beautiful arched stain glass windows that catch the sun perfectly.

If you ever do decide to wander further on, then you’ll find there’s much more beauty and intrigue to entice you. One of the most interesting of which would be the Museo de Arte Contemporáneo, a modern art museum that you’ll find hard to miss as it’s at direct odds with the rest of the landscape! Where you’re used to seeing a regal, gothic, muted beauty, the Museo de Arte Contemporáneo gives you the equivalent of a hearty slap on the back as it stands in all its straight-edged glory flaunting an array of coloured panels! Interestingly, these coloured glass panels are actually a little nod to the pretty stain-glass of the cathedral, rather than a direct contrast to it.

Inside, it’s the home to over 1,650 pieces of art, all dating back to 1992 with a particularly astounding 21st century collection. The pieces themselves were created by predominantly Spanish artists, though you’ll also find artwork by some Lebanese and international creators too.

These two places are far from the only points of interest (and if we told you everything we’d spoil the fun of discovery!) but if and when you tire of wandering and your eyes hurt from all the beauty, then it’s time to head to the Plaza Mayor. It's an incredible building that sits in a square among sandy and rouged buildings either side and has stood since 1672, charming those who have visited ever since. The square at one point in time was going to be called The Bread Square, due to the influx of bakeries in and around it, but now is more home to various cafés and restaurants. Why not rest your weary feet, sip some delicious coffee and marvel at the little world you’ve discovered?

These are just two areas of northern Spain, elsewhere you’ll find Bilbao, Santander, Gijon, and Torrelavega. All beautiful, all with so much to discover including stunning coastlines, quaint harbors, a rich culture and of course excellent food.

So, no, there isn’t a reason that northern Spain is less frequented, it’s just a great secret few people know about.

And we were the ones who let it slip...

Turns out we're great at holidays, not so good with secrets…

Inspired? Ready to take the road less travelled? Drop us a comment and take a look at our great villas in Spain.