Rent a villa in Menorca and get the most out of your holiday. Browse over 180 villas and narrow down your search by filtering on the number of bedrooms, bathrooms and other facilities
Read guide

Our 10 best villas in Menorca

Check out our best villas in Menorca.

Villas in Menorca with private pools

Rent one of our cheapest villas in Menorca for a low cost holiday.

Reviews of our villas in Menorca

We have 493 reviews of our villas in Menorca.

A well equipped, good value for money villa, close to shops, restaurants and beach ( lovely but lots of steps) Unfortunately lots of ants and flies, but I think that just goes with the territory. Pleasant and comfortable, nice outside areas in the villa to eat. Only reservation was the road was a little busy at times.

Our Holiday was amazing. Agni is always ready to help you if you need. The villa was beautiful, very confortable (excepted for what ive said before) and weve been very fine there!!

We, 4 adults and a baby, had a wonderful time at the villa. It is quiet but so close to the beach, supermarkets and restaurants. You can even hear the sea when ita€™s not totally calm while sitting on the terrace of the villa. Having our own pool was great! It was kept very clean by a man who came every few days. We just skimmed the odd fallen berries berries from the trees every morning with the net supplied. The cleaners that came a couple of times during our 14 nights were lovely, and they cleaned so fast so they were gone in no time, but they did a wonderful job. A taxi rank is a minutes walk away, the mini train and a bus to Mahon the same. Beach Villas were great at returning any text

Just returned from a fabulous family holiday at Villa Pepa. Really nice traditional style villa with lovely grounds in a fantastic location near shops, restaurants and the beautiful beach at Cala Galdana. It was very clean and well maintained. Our 2 small children absolutely loved the swimming pool! I would highly recommend this Villa, however please be aware that there is no air-con (only plug-in fans)

Postcard Menorca is the second largest island in the Balearics and the third most populated, situated in the west of the Mediterranean between Algiers and Marseilles. Unlike its neighbours Majorca and Ibiza, Menorca is a peaceful, palm-tree fringed resort that remains largely untouched by tourism. Families and couples will find that Menorca offers the full package when it comes to a quiet and relaxing beach holiday. As a UNESCO Biosphere Reserve, this sun-kissed holiday destination boasts seemingly endless beaches, charming whitewashed villas and lush greenery stretching all the way down to the coast. The island is dotted with golf courses, walking, cycling and riding trails, as well as a beautiful coastline offering a wide choice of water sports.

The elegant port city Ciutadella and Menorca's capital city Mao-Mahon offer traditional markets, Roman and Moorish architecture and harbour side restaurants and cafes with a warm and friendly atmosphere. Take a hike to the top of Monte Toro for panoramic views of the island’s contrasting red sandstone and limestone landscape. Here you'll find the island's tallest peak, home to ancient stone monoliths, wildflowers and local wildlife. Remnants of Menorca's ancient history can be found all over the coast, from Fornell's Bronze Age watchtower to the Stone Henge-style altars at Torre d'en Galmés, abandoned after the Roman occupation. There's also an ancient gin distillery - the last remaining from the 18th century, when Menorca was under British rule. Taste the refreshing Mediterranean version, as juniper berries mix with herbs, using copper stills that are over 100 years old.

Our Menorca villa rentals put everything on your doorstep: the sound of the sea, crystal clear waters, 216km of Mediterranean coastline and an idyllic beach escape in the heart of the Balearics! The island's main airport, Menorca Airport, has direct flights to major cities in Europe and the UK, with airlines like Easyjet, Jet2, TUI, Ryanair and British Airways.

Where to go in Menorca

Maó-Mahón, the island’s capital, is a town and municipality on Menorca’s eastern coast. King Island, or Isla de Rey, sits in the middle of the Port of Mahon harbour and is famous for its 18th Century military hospital of the same name. You can get a direct boat or stop as part of a harbour cruise to explore this magnificent building, its gardens and the ruins of the 6th Century basilica. The La Mola peninsula, at the city's entrance, is home to the Fortress of Isabel II, an important landmark in Menorca's naval history. If it’s secluded beaches and bays you’re after, then you’ll find plenty dotted around Menorca’s eastern coast.

Es Castell is a municipal town and popular lively holiday resort in the eastern part of Menorca. It is well known for its calm water and sunny beaches making it perfect for sunbathing, wind surfing, diving and sailing.

Es Mercadal is a town and district at the centre of the island and is dominated by Monte Toro, Menorca's highest mountain at 342m above sea level. It is also home to a church and shrine of the Virgin Mary since the 13th Century. Enjoy breath-taking views of Menorca from the summit. The fishing village of Fornells is on the northern coast of Menorca and is one of the island's main water sport destinations. A must-see is the unusual Fornells Tower – a coastal defence tower built by the British in the 19th century during the island's occupation. The beaches in the north of Menorca are quieter than the south as there are fewer resorts. They get slightly less sunshine as they’re north facing but they’re equally as stunning. This picturesque region is windier than the south, ideal for water sports such as sailing and windsurfing. The most popular tourist destination in this part of Menorca is the family-friendly holiday resort of Arenal d'en Castell, where you'll find many Blue Flag beaches, a golf course and sand dunes surrounded by dense woodlands. Arenal d’en Castell is the largest resort on the northeast coast. It’s kept its charm and is not over developed. Discover whitewashed villas, low rise buildings and easy access to wide, sandy beaches.

Sant Lluís, together with Alaior, Es Migjorn Gran and Ferreries resorts stretches along Menorca's southern coast. Here you'll find a mix of a flat landscapes, deep gorges and secluded coves at the bottom of limestone cliffs. Menorca's South is sheltered from the Tramuntana winds so is more popular for holidaymakers looking for a sun-drenched beach break. Most of them are within easy reach of Maó-Mahón, the island’s capital. Visit the vibrant Blue Flag beaches of the area’s most popular resorts: Punta Prima, Binibeca, Cala en Porter, Son Bou and Cala Galdana. Stay in Punta Prima in Menorca’s south western tip for a relaxing villa holiday by the sea. It’s a perfect blend of secluded beaches with pine trees and sandy beaches. Just 25 minutes away from Menorca’s airport.

Ciutadella, on Menorca's west coast, was Menorca’s capital before the British moved it to Maó-Mahón in 1722. It's rich history leaves behind a charming port, old paved streets and Gothic buildings located in the town square Plaça des Born. Ciutadella town boasts the most famous beaches in the area: Cala Blanca, Cala en Blanes and Son Blanc with plenty of sunshine to enjoy.

Menorca’s pleasant Balearic weather makes it the perfect beach holiday destination. Enjoy all the charms this resort has to offer by renting one of our villas with a private pool.

Take a look at our blog posts about where to go in Menorca and what to do on your holiday in Menorca.

9 Things You SHOULDN'T Do When Visiting Menorca

With more beaches than Ibiza and Majorca combined and plenty of wonderful old towns, harbours and markets to explore, Menorca really is one of the Balearic's most underrated islands. So they say! Whilst it is only getting more popular summer by summer, with the fantastic Menorca weather, along with its unspoilt beaches and laid-back atmosphere, we can think of 9 things you should definitely avoid when thinking of Menorca holidays... 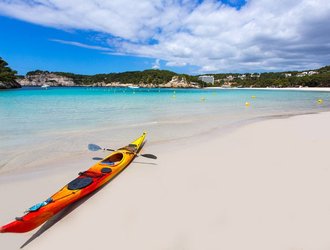 The Weather In Menorca

Want to know the weather in Menorca all year round? As well as when it's best to go for warm sea temperatures and not so much rainfall? No problem. 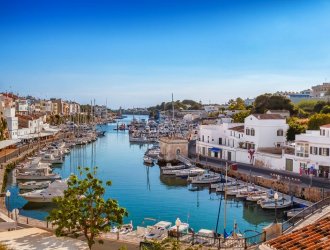