10 Photos To Inspire Wanderlust in Thailand 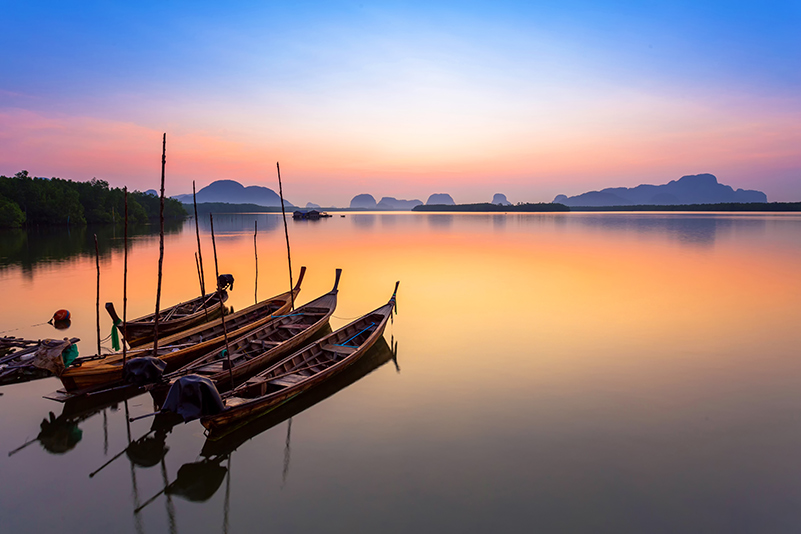 Thailand is one of the most beautiful destinations in the world. With its crystal clear waters, luscious landscapes and incredible culture, it's the ultimate holiday location if you're looking for a little slice of paradise. We've put together some of the most spectacular photos around, which we can guarantee are going to make you want to go to Thailand ASAP. Prepare for some wanderlust...

The official residence of the king, The Grand Palace is the most famous landmark in the city of Bangkok. An enormous, regal construction with a plethora of stately courtyards and lavish gardens, this is a sight not to be missed.

One of the most distinctive features in Thailand and something we see in all the holiday brochures, Phang Nga Bay is best known for its sheer limestone karsts that jut out of the emerald waters. This is certainly somewhere to visit if you're looking for that postcard photograph.

Wat Arun directly translates to 'Temple of Dawn'. It's a magical construction built in honour of Aruna, the Hindu god that is often represented by images of the rising sun. The central tower rises an enormous 280ft into the sky.

Sukhothai Historical Park can be found in the North of Thailand and contains the remains of Sukhothai, known as the capital of Thailand in the 13th and 14th centuries. The highlight of the park is the Royal Palace, set amongst 200 sets of ruins and 26 temples.

Ayuthaya Historical Park contains the spectacular ruins of the second capital of Siam. By 1700, Ayuthaya was home to an enormous one million inhabitants! Since being destroyed in 1767 by the Burmese army, it has been restored to its former glory and is now open for the public to enjoy.

Located not too far from Phuket, Koh Phi Phi is renowned for its infamous viewpoint and from it, spectacular views! It was also the filming location for the much-loved 2000 movie, 'The Beach'. The perfect place in Thailand to enjoy some water sports! Koh Phi Phi is certainly worth a trip whilst it remains unspoilt from the growing tourism to the archipelago.

Named after the mountain on which it stands, Doi Suthep Temple is a sacred place to many Thai people. The story goes that the King placed a relic on the back of a white elephant and sent it forth to find the site to erect the Temple. We recommend watching the sunset from the balcony.

9. Wat Benchamabophit or the Marble Temple

You can find this beautiful temple in the Dusit district of Bangkok and the name literally translates to 'the temple of the fifth King located nearby Dusit Palace.' It was created by the King's half-brother and built in Italian marble.

This ancient temple was built in the 14th Century and was completley destroyed when the Burmese army attacked and desecrated the sight by beheading every Buddha effigy. Eventually, restoration work began in the 1950s, but no one knows how the Buddha's head became entwined in the roots. There are many plausible theories including a theif trying to take the head and abandoned it until the roots grew around it.

Have we inspired your next holiday? See our villas in Thailand...