Apartment with 3 bedrooms, 2 bathrooms and shared pool in Kissimmee, Florida

Apartment to rent in Kissimmee, Florida

This unit is a 3 bed 2 bath condo features nearly 1400sqft of living space and is fully equipped with everything that you will need for your vacation. Fully air conditioned and furnished to an individual style by the owners. Towels and linens are provided; you will only need to bring your beach towel!

The large open living area has a sofa and loveseat, a minimum 29” TV, and DVD player. The dining area features a 6 seater table and adjoins the living room.

The kitchen is fully equipped to enable full family dining. A large fridge and freezer, stove, microwave and dishwasher, and of course all the pots, pans, cutlery and dinner service for 8 people. A full size washer and dryer in every unit!

These condos are an unbelievable value and once you have stayed with us, staying in a hotel will never be comparable!

The condo is located a few short miles from the entrance gates of the happiest place on earth and other Orlando attractions, and just minutes from the action-packed Highway 192, with designer outlet malls and restaurants that cater to every taste. The Osceola Parkway is very convenient to the villas and offers fast, traffic-free access to Disney and the airport.

It’s a great place to stay to enjoy the resort and Florida weather or to stop and refuel from a long day of sightseeing and parks.

This is a resort setting that will become your home away from home in Orlando. Onsite accommodations include an outdoor swimming pool, game room, tennis court, club house/fitness center and playground, the condo has something for every member of the family. Located just 10 minutes to Disney property, you will struggle to find anywhere closer with such great facilities at this price!

Don’t just be another customer, BE OUR GUEST!

"The main bed was comfortable and the owner was very responsive and has allowed a late check out which is really appreciated. Suited us better than a hotel would as has the microwave for warming baby bottles and a washer/dryer for washing 3 kids clothes."

"Everything else was great."

"The property was spacious and very comfortable! It was only about 10 minutes away from Disney World. My family and I were able to cook meals there and have the same level of comfort that we have at home. The owner of my unit reached out to me several times to ensure that I had no problems during my stay; he was very accommodating! This stay was way better than any hotel I could have booked; my family was comfortable and happy!"

"This is a great location and extremely close to Walt Disney. Would recommend this unit to family. Thanks for having us in your condo. We appreciate your timeliness in responding to us, thanks again. Happy new year."

"It was Great. We are satisfied with everything. Nothing to complain about. Maybe we Come back."

"My family n I just came back from your lovely villa just wanted to say thanks so much we had a blast love love the location .. place was clean n homey my kids loved it will be back when possible and I will recommend your lovely place to others."

“La limpieza y el confort” "The next time we travel to Orlando will contact you to return to the same place or else you tell me. Thank you very much. Regards, Fernando."

"Amaury was very kind and accomodating! He adjusted his nights stayed minimum for me, and it was much appreciated. The location was perfect, and around many things to do. It was convenient and just what we needed, since not too much time was actually spent in the apartment. Would definitely consider him again for any future Orlando stays."

“Spaciousness, cleanliness, equipments. Ease of checking in and out. Parking close by. Quiet area.”

"Have a great stay a Amaury's place. The place looks really good and it is in a nice neighborhood. We will definitely stay there again when we return to Orlando."

"Location and size! Owner is very good at communication and kept in touch to check we were comfortable."

“Thank you VERY much! We really enjoyed our stay! Thank you for being so accommodating with the payment situation. It has been a pleasure communicating with you and we look forward to staying again! Happy New Year!”

“The size of the unit was really nice like a home away from home. Good location for all of the attractions.”

“The facilities were far better than i anticipated. This rates as probably one of the most relaxing vacations I have ever had even though we worked in the Gator Farm, Downtown Disney and Disney World. We enjoyed quiet nights and sleeping late - undisturbed. We will most definitely be staying there again.”

“The area was nice and convenient to other businesses and close to the marriot where the conference was being held.”

“There was plenty of room, it was clean and well maintained. I appreciated the information and follow up from the landlord. The price was more than reasonable for what we had.”

“We could all stay in same place. Had small pool OK for the kids. Security visible on grounds.”

Outside this apartment in Kissimmee, Florida

This apartment is in the town. It has a shared pool, a barbecue, a garage, outside lighting and a tennis court. Car hire is recommended as the apartment is less than a 15 minute walk to at least a couple of shops, bars and restaurants; however parking is not available.
Prices & availability 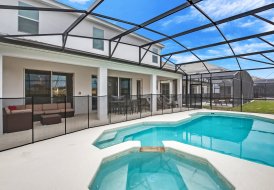 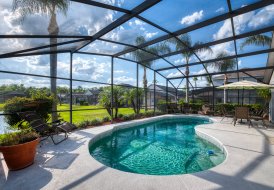 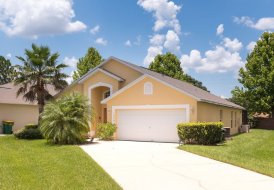 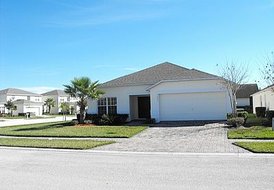 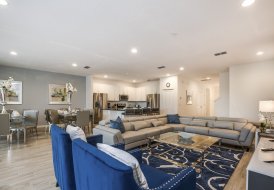 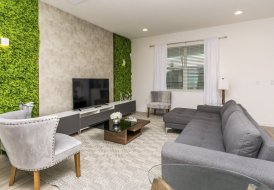 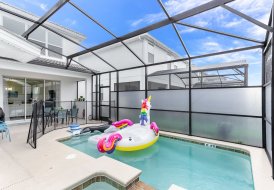 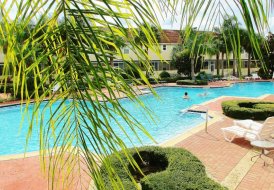 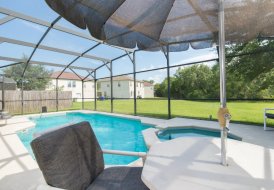 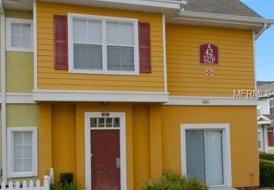 From £495 per week
True Happiness
House
Sleeps 8, 4 Bedrooms
View all properties in Kissimmee
Add to wishlist Added to wishlist