Family owned apartment , all rents are used to maintain and keep apartment in good condition. This benefits all our family who use the property and all clients who visit to find a home from home. 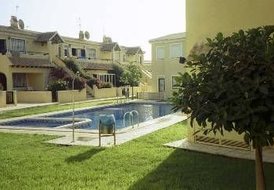 From £157 per week
Alicia,villamartin,alicante,costa Blanca

An excellent holiday here. Found the walk to the Plaza took much longer than was stated especially in the heat. The facilities at the apartment were excellent and it was well equipped for our needs. We had never been to the Costa Blanca before but found it a lovely place to be based. The only problem we had, if it was a problem, was that all the area was very "English". We eventually found a couple of nice Spanish restaurants, the Zenia Beach and a tapas restaurant on the strip between the Eiffel Tower and the Balti Tower. We had a few barbecues at the property and would suggest that a new barbecue is bought for next season as the legs were wonky. (To be fair we were pre-warned about this by the owner.) All in all we enjoyed our stay and would recommend to others.

We had a lovely stay in the villa..everything you need for a holiday.. The swimming pool was just two steps away from our door which the children loved. I would definitely come back, its compact and comfortable the only thing that was missing was wi-fi . The owner was great to deal with as well ,very nice and friendly .

the apartment is much better than the photos show,it is very very clean and tidy i would go as far as to say it has been done to make you feel right at home,excellent neighbours who cant do enough for you and diane the lady who looks after you during youre stay is second to none and will arrange outings taxis airport runs nothing is to much trouble for her thanks diane,the people definately made this a holiday to remember well done to the owners they are definately delivering amazing value for money and a second to none service a great big thankyou from me and my mum.

An excellent property. Very clean. Easy to find and suited our needs. I would use them again.

Villamartin suprised me being such a family orientated place. We used a couple of the restaurants in the plaza and the service was good and friendly. We did not use the golfing facilities so I can not comment on these. The apartment overlooked the communal pool which was maintained and peaceful. The apartment was ground level making it easy for us with all of our daughters belongings - pram etc. Due to a small step from the courtyard to the front door it may not be suitable for wheelchairs or the disabled, but overall very accesable otherwise. The apartment was walking distance to the Plaza for an evening out, however, if you wanted to go out of the golfing facilities in to La Zenia and beyond you definately needed a car. Overall - an excellent holiday.

We had an excellant stay at Villa Maria, it far exceeded the photos which do not do it complete justice.... shops & restaurants are just up the road, Victorias Chinese Restaurant is the best...best chinese I've ever had. The pool is actually a lot bigger then it looks in its photo...the kids loved it, was in there all the time...even at night when its all lit up, it looks and is great. Joe & Maria were in Spain when we were there and popped round to see that we were alright and had every thing that we needed...which we did, the villa is extremly well equiped. Recommend a trip to the market which is about 15-20 min walk away but worth it...take a look. If you have a B-B-Q go to Mr Lambs the butcher up the road, does a really good selection of meats and bits.... and is really helpful. La Marina is a nice, quite relaxing place ( which is what we wanted ), but if you want to get about a bit the local car hire is very reasonable.There's loads more that I could say but would take for ever putting it down. Would and will definatley come back to Villa Maria again..... we had a great time...cheers.