Clickstay on Tour: Tom Spends 3 Days in Santorini and Ios 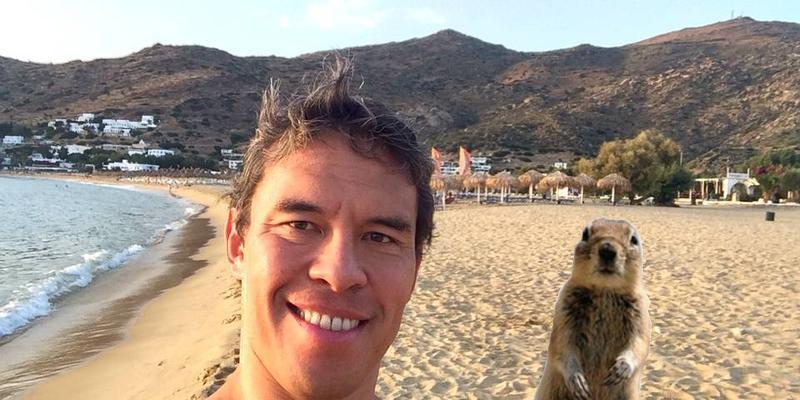 This was not my first trip to the Greek Cyclades islands. In my early twenties I went inter-railing around Europe and visited Ios and Santorini where I met some people that I now count amongst my closest friends. Our families are close: we go on holiday together and our kids are good friends but a few months ago we decided we should have a reunion and return to where it all began.

We flew to Santorini and stayed in Kamari which was a short drive from the airport, so our first day was spent wandering around its white-washed streets, drinking lots of cold beers and relaxing on the beach.  We stayed in a self-catering apartment but the local food was so delicious that ate out the whole time.  I had heard about this kebab place on Kamari Beach Promenade called The Souvlaki Stop which has the proud boast of “the fourth best kebab place in the world (as featured on CNN)”.  A claim like that couldn’t go untested but I have to say it was excellent – made all the better by the wonderful view.  Fourth best in the world?  I’m not sure but maybe that’s the subject of another investigative trip….

After a gritty Greek coffee we went to the port to catch our ferry to Ios where we were staying in another apartment for the next two nights.

The highlight of the trip was revisiting Milopotas beach which has changed a lot since our last visit.  It’s a far cry from the camp site and shack selling (rather tasty) ham and cheese paninis.  There are now loads of sophisticated boutique hotels and restaurants but, despite all of that, it’s kept its charm and beauty.

That night we went to Lord Byron, a restaurant I’d definitely recommend – I had one of the best tuna steaks of my life there!

The next day we all had pretty sore heads so we had another day at Milopotas beach and, once we’d recovered, booked ourselves into the Lord Byron again for our last night before diving in and out of the various bars in a hunt for old haunts.

I’d definitely go back to both Santorini and Ios: Santorini has a very relaxed feel and is easy to get to as it has its own airport.  It’s perfect if you’re looking for charming family friendly beaches and restaurants with reasonably priced places to stay.  Ios is a little more tucked away and has a deserved reputation as a party island whilst having an incredibly friendly and intimate feel.  We’re already planning our next reunion!