Beach villa with 3 bedrooms, 1 bathroom, shared pool and golf nearby in Gumusluk, Turkey

Villa to rent in Gumusluk, Turkey

The villa is set on a small complex of six semi-detached villas, arranged on two sides of the shared swimming pool. The villa is furnished to a very high standard, 3 bedrooms , one double bedroom and 2 twin bedrooms, (sleeps 6 & 2 Babies/Toddlers), kitchen/living room, bathroom, downstairs wc/ cloakroom. Two double sliding doors open on to the terrace, which over looks the small garden and beyond, the swimming pool. On the top floor there is a spacious roof terrace for real sun lovers, a wooden table and chairs, clothes drying area and views in all directions, and external lighting.
Sitting on the patio you have your own BBQ and a wooden table and chairs for six/eight people, where you can enjoy a cool drink or dine as you wish. The patio also has external lighting. If you are driving there is room for parking in the complex car park, a few yards from the villa.

Outside the Villa
There is a shared swimming pool, and the garden is planted with fruit trees and aromatic plants. The surrounding area has Orange and Lemon Groves which makes the short walk to the beach very pleasant. The restaurants, bars, mosque and shops are just a short distance away in the 18th century village of Kadikalesi.

There is a dolmus bus that runs regularly into all the local Villages including Gumusluk renowned for its fish restaurants. There is also a taxi rank nearby in the village.

The Area
The villa is centrally located approximately 5/10 minutes walk to the beach and the centre of Kadikalessi.There are Restaurants and Shops within the village of Kadikalessi

Turgurteis 10 minutes by bus/car where you will find many restaurants, bars, shops and banks.
The recently built multimillion pound harbour in Turgutries is beautifull it has a Cinema and multiple designer shops. There is a luxury leisure complex in it. which has a large outdoor pool area, tennis courts, health suites, bar, restaurants etc. It is The Designer end of town!

The town of Turgutreis is situated at the furthest tip of the historic Bodrum Peninsula with fantastic sunsets overlooking a view of ornamental islands on the horizon.

Named after the famous admiral, Turgutreis, this is a town in its own right and combines a compact town centre with several long sandy beaches.
Wind surfers favour this part of the coast, as the winds are generally stronger,making it ideal during the hot summer months.

The Bodrum Peninsula is small and it is very easy to travel to all the other small towns. For those who are adventurous the area has an excellent bus service called dolmus. These are new reliable mini- buses and offer services all day to Gumusluk and Bodrum with connections to all other towns often for less than a pound.

Gumusluk, a favourite peninsula village, is close by. Its position on the site of the ancient city of Myndos has ensured that no large scale development has been allowed.
Gumusluk is a fine place for snorkelling, in the calm waters of the sheltered bay. Various sunken ruins can be found here and there is a causeway, sometimes above water, sometimes below, to Rabbit Island where almost tame rabbits run around.
To one side of the headland is a sandy beach with beach side restaurants and sun beds and a short walk through the little lanes with craft stalls and grocery shops will bring you to the other side where the famous fish restaurants, with their tempting displays of locally caught fish, are perched right on the shoreline.
A small Byzantine church above the beach is now a cultural centre with a regular programme of concerts and exhibitions.
No other area on the Turkish Aegean coast provides the visitor with the opportunity to experience traditional Turkish life only a few minutes away from the hustle and bustle of a modern tourist centre. One of the unique features of Bodrum as a holiday resort is the combination of daytime activities, tranquil bays, beaches & villages to enjoy and the Bodrum nightlife.

Further Information
NEARBY
The most prominent feature of Bodrum is the castle of St. Peter. The castles origins date back to the knights of St. John. Under Turkish care the castle has undergone several uses including being a military base, a prison and a public bath. But now it is one of the finest museums in this region
Gümbet Only 2-3 km away from Bodrum The popularity of Gümbet has generated serious nightlife and the streets of Gümbet vibrate till dawn with the music from numerous bars, discos and street side-cafes
Torba
This little village is hiding in a charming little bay. North of Bodrum It is only active during the summer months is a pleasant and relaxed place to visit.
There are also the remains of a Byzantine monastery, Ferries to Didim leave from Torba harbor across the Gulf of Güllük.

FURTHER AFIELD
Ephesus is the best-preserved classical city on the Mediterranean, and perhaps the best place in the world to get the feeling for what life was like in Roman times. As a strategic coastal gateway to the Eastern World, this Ionian refuge grew to be the second largest city in the Roman Empire. Legend has it that the Virgin Mary, accompanied by St. Paul, came to Ephesus at the end of her life, circa 37-45 AD. In 1967 Pope Paul VI visited the site, where a chapel now stands, and confirmed the authenticity of the legend. Also the Basilica of St. John is located near Ephesus. St. John is said to have lived the last years of his life here and after his death, a shrine was located over his grave.

Pamukkale, this is a beautiful and spectacular natural site, unique in the world with its fairy-like, dazzling white, petrified cascade. The thermal waters have been used since Roman times for their therapeutic powers.

This villa has 10 verified reviews.

10 out of 10 people recommend staying here

Jaquis house is very well located between Gumusluk and Turgutreis, 6 minutes walk from the sea and 8 minutes from good restaurant. The pool is a good size so you can swim lengths and the garden is well maintained. The property itself is well stocked (possibly a bit too well stocked). We liked it a lot and would seriously consider returning.

Lovely villa and close to all facilities. Owners description was acurate, particularly liked the fact that basic supplies were there when we arrrived so did not have to worry about finding a supermarket straight away.

Loved the area and intend to go back

Very well equipped with a very nice & well maintained pool, Nice peaceful location, The local Dolmus service is frequent which makes getting to where you want to go very easy & they run untill 2am everyday. We are yearly visitors and have found this is the best Villa we have stayed in. We look forward to returning

Jackie
I must firstly apologise for taking all this time to contact you regarding our holiday to your property in Turkey. What can I say other than we all had a fab time! The villa was perfect for our group. We loved the pool & spent most of our days beside it soaking up the lovely sunshine, not a cloud did we see in all the time we were there. Im afraid we rather took over the pool area but not all the villas were occupied so it didnt seem to be a problem. We did a boat trip 1 day which was lovely & loved getting the dolmus into Turgetreius each evening for our meals. We were very pleasantly surprised by the cost of eating out, so cheap compared to europe. Like everyone else says the villa is so well equipped unlike one of the others where the lady staying there for 3 weeks had no pillows & only 1 cup! she wanted to move into yours when we left! We were very envious of her staying out there for 3 weeks tho!
I would love to go back there again one day hopefully.
Thank you so much again Jackie. I hope you have been able to enjoy the villa yourself this summer.
Kind regards
Lynne

This villa was lovely and equipped with absolutely everything you could need for a holiday, including beach towels, childrens toys etc! The complex itself is beautiful neat, tidy and extremely well-tended. The pool and the surrounding area is spotless, the couple from the management company are on site maintaining it almost every day, and are very helpful. I would recommend this villa to anyone, we had a great time, and found it superb value for money.

Kadikalesi itself is beautiful and unspoiled, but five mins on a dolmus from the larger and busier Turgutries. In Kadikalesi we tried the Kekik Beach Bar and Restaurant, which is family run, and they are lovely and friendly. In fact we found all the local people friendly - the lady from the Deniz Market even brought us out stools as we sheltered under her tarpaulin in a thunderstorm one night! A great holiday!

The property had everything and more for a family holiday, including anything required for an infant. Set in a quiet part of the area, the pool, gardens and property were all well maintained, clean, tidy and very welcoming.

I am currently here in Kadikalesi seldom have I found a rental wıth extremely perfect facilities. 10 minutes from town with excellent choice of Restaurants, but to top it all is the accomodation I am staying in. I wish I owned this house. Tranquil surroundings and everything within easy reach. Absolutely Brilliant I have already booked for next year.

The villa was beautiful and in lovely surroundings. You are far enough away to feel that there is no one around you yet just two minutes walk away you can get a bus to the main town. The villa had everything that you needed, was very clean and well looked after, as was the pool and grounds. The surrounding areas provided everything you would need on a holiday, including towns to explore, boat trips, water parks and historic attractions. The restaurants in the area were great too, especially the fish in the village restuarants. I would definately return and recommend a visit!!

Mrrs B Jones September 2006.Had a lovely week plenty to do in surrounding area. Beach not crowded, very peacefull and relaxing holiday. Villa had all the facilities we needed. will definately book and return.

Outside this villa in Gumusluk, Turkey

This villa is in the countryside and in a quiet area near the beach. It has a shared pool, a balcony, a barbecue, outside lighting and a garden. Car hire is not necessary as the villa is less than a 15 minute walk to a large selection of shops, bars, restaurants; however parking is available if required.
Prices & availability

There is also 1 single sofa bed in Lounge, 2 cots 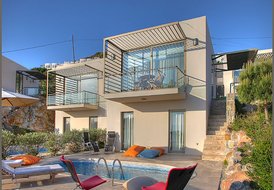 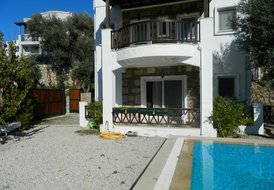 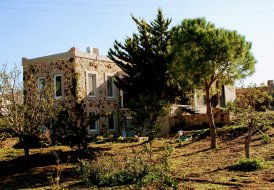 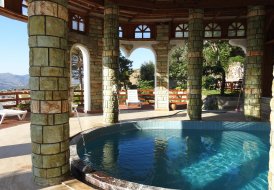 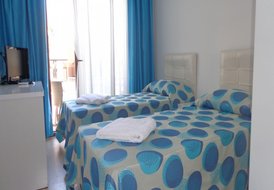 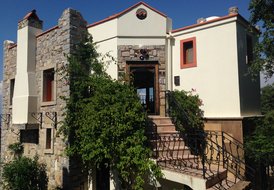