Apartment to rent in Hammamet, Tunisia

Wonderful nice apartment, quiet and comfortable, located in the heart of the Marina "Yasmine Hammamet" between a beautiful sandy beach and a beautiful marina.

Wonderful nice apartment, quiet and comfortable, located in the heart of the Marina "Yasmine Hammamet" between a beautiful sandy beach and a beautiful marina.

La Marina "Yasmine Hammamet" is a magnificent luxury residence, located on the seafront around a marina. With its swimming pool, restaurants, shops, cafes, bars and luxury hotels around the Marina is a great place, the same calm and busy time for a vacation with family or friends.

500m is about Medina of Hammamet Yasmine and Carthage Land theme park.

With its 120m2, the apartment sleeps 6 plus 2 children and consists of a living room / dining room with balcony and a large window with a great view of the canal, three bedrooms, a kitchen, of a bathroom and a shower room.

The apartment is equipped with central air conditioning and is on the first and last floor.

The apartment is nearlu 120 km from El Djem which is famous for its amphitheater, often incorrectly called a Colosseum (roughly translated from Latin as 'that thing by the Colossus'), which is capable of seating 35,000 spectators. Only the Flavian Amphitheater in Rome (about 50,000 spectators) and the ruined theatre of Capua are larger. The amphitheatre at El Djem was built by the Romans under proconsul Gordian, who was acclaimed Emperor at Thysdrus, around 238 and was probablycitation needed mainly used for gladiator shows and chariot races (like in Ben-Hur). Many tourists come here to see what it was like to be inside what was once a place where lions and people met their fate. Much of it is crumbled but the essence of it still remains. It is also possible that construction of the amphitheatre was never finished.

This apartment does not have any reviews but the owner has 1 review for their other properties.

Outside this apartment in Hammamet, Tunisia

This apartment is near the beach. It has a shared pool and a balcony. Car hire is not necessary as the apartment is less than a 15 minute walk to a large selection of shops, bars, restaurants; however parking is available if required.
Prices & availability

There is also 2 single sofa beds in Liviing room for kids only, 1 cot 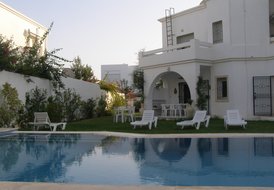 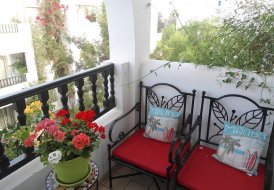 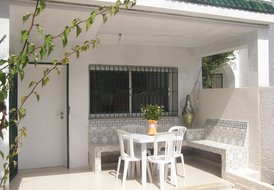 From £113 per week
Beautiful Appartement In Villa At...
Apartment
Sleeps 6, 3 Bedrooms
View all properties in Hammamet
Add to wishlist Added to wishlist