Charming Apartment In The Old Town

Beach apartment with 1 bedroom and 1 bathroom in Villajoyosa, Spain

Apartment to rent in Villajoyosa, Spain

Charming one bedroom, third floor self-catering apartment in the heart of the historic Old Town of Villajoyosa, Costa Blanca, Spain

The apartment, which was sympathetically refurbished in 2006, is on the third floor (top) of an 19th century town house in the heart of the historic old town of Villajoyosa (joyful town).

It is ideally suited for a maximum of 3 adults or 2 adults + 2 young children.

The living area completely opens out onto a sunny terrace which overlooks the rooftops of the old town down towards the mediterranean sea.

The apartment has one twin bed bedroom with ample wardrobe and storage space, a modern bathroom with a washing machine and shower, a beamed living area with a modern fully equipped American-style kitchen and a sunny terrace with patio furniture, extendable canopy and a small utility room.

Smoking is OK if it is outside on the terrace.

The best kept secret on the Costa Blanca
Villajoyosa which dates back over 700 years is a working town and the sea has played a vital role in its history and culture. Fishing boats return to the port in the afternoon and there is also a marina.

The distinctive, brightly painted facades of the houses in the old town were designed to guide weary fishermen home from afar, and the daily afternoon fish market is a delight.

A colourful history saw the Romans first settle here, and the old town, built on top of an ancient castle, with its ancient bridges and gothic church has been declared a historic site. Cool narrow cobbled pedestrianised streets lead from flower-adorned balconies to the mediterranean sea.

The town is famous for its mouthwatering locally made Valor chocolate factory from which chocolate is exported around the world.

The scenery is stunning, with a mountainous backdrop and surrounding citrus plantations giving way to assorted coves and secluded beaches.

The town is especially popular with the Spanish during the summer months for its tranquillity, beautiful walks, marina/port, restaurants and parks together with its kilometres of golden sandy beaches.

Although only 7 kilometres south of the tourist restort of Benidorm, Villajoyosa is a world apart with no high-rise hotels or package holidays. It has a small expat community mainly from Norway, the UK and France.

During the summer months the old town comes into its own with many local festivals and events culminating in the week long re-enactment of the battle between the Moors and Christians during the last week in July. Out of season the weather is mild, an average of 19 degrees and 300 days of sunshine per year.

What to do
Apart from enjoying the town itself, it is in easy reach of both Alicante, Campello, Benidorm, Altea, and Denia. A half-hourly tram runs along the coast from Alicante to Denia and there is also a local bus service.

Also in easy reach are the theme parks of Terra Mitica, Aqualandia, Terra Natura and Mundomar.

The town has a central tourist office which offers a wide range of information, including local maps, day trips, and monthly information on cultural events and festivals.

This apartment has 9 verified reviews.

9 out of 9 people recommend staying here

Excellent cosy apartment & good value for money! Clean rooms and towels, basically we had everything to hand in this wonderful apartment, if youll go there youll understand what we mean by that.

The owner was very affable and polite.

Great location conveniently situated for the shops, bars and beach.

Would recommend this apartment to anyone, we will definitely be going back.

This was a very well equipped apartment with everything for your needs. Michael provided a welcome pack which we really appreciated. We could take the chairs and the beach umbrella to the beach which saved us a fortune! We had a lovely week and we will definitely go again, we loved the Old Town and it was so near the beach. I would not recommend it to anyone with walking problems as it was a long way up the stairs! Plenty of hot water - the shower was great, even a washing machine.

Had a great week in the apartment, it was well equipped and we had everything we could have needed.

It did get a bit warm but it was over 30 degrees everyday so what can you expect.

Michael went out of his way to help us when our car broke down on the way there and the starter pack of food and drink he left was most welcome.

All in all I would strongly recommend the apartment to any couple wanting to chill out.

Just returned after a week in this wonderful bolt hole appartment in the heart of delightful and charming Villajoysa old town, where daily shopping was litterally on the doorstep.

Michael met us with a warm welcome as arranged in the seafront square. The apartment was kitted out very thoughtfully, and even included shampoo and shower gel! We were able to find both CDs and DVDs that suited our taste amongst the collection in the apartment.

If we visited this area again, we would certainly rebook. his home from home property.

It is a perfect apartment :-)

My husband and I had a fantastic holiday in Villajoyosa. The town is beautiful with an abundance of excellent restaurants and a fabulous beach. The apartment is superb and is ideally situated in the old part of the town just minutes from the beach. It is well equipped and has everything you could want and more from holiday accommodation. Michael was a great help and the welcome pack he provided for us on arrival was really appreciated. If you are looking to experience the true Spain on your holiday then this is definately for you!

"Lovely place to stay with a feel of old spain, especially as you are within the castle walls, with narrow streets. The places is full of locals with lots of characters and children playing madly about. The golden beach it so close but most of all sitting out on the balcony overlooking the rooftops, drinking beer, wine eating olives, nuts and crisp was wonderfully relaxing after a days climbing. I think we cooked in more than most but it was just a quick step to several restaurants - lovely. For a romantic week for two away from the crowds or like us a week of mad climbing its just right!" Value: Excellent , Met expectations: Exceeded them , Recommend: Definitely , Overall: Excellent

"Lovely property that had everything you would need regardless of the weather. Very convenient location for both the beach, the village, the local shops and for travelling into either Benidorm (short train ride away) or Alicante."

Outside this apartment in Villajoyosa, Spain

This apartment is in the town near a lively area and the beach and mountains. It has a balcony, outside lighting and a sea view. Car hire is not necessary as the apartment is less than a 15 minute walk to a large selection of shops, bars, restaurants; however parking is not available.
Prices & availability

There is also 1 double sofa bed in living room, 1 cot 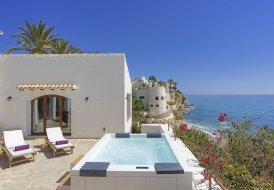 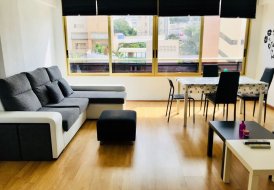 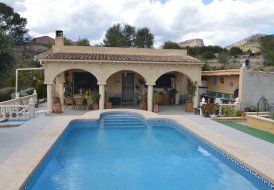 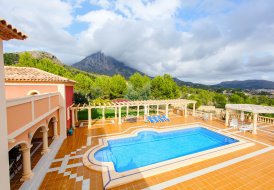 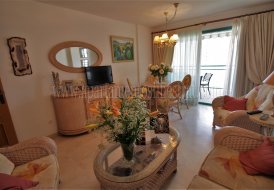 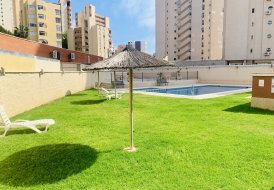 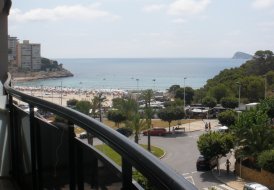 From £518 per week
Apartment In Mediterráneo Almadr...
Apartment
Sleeps 4, 1 Bedroom 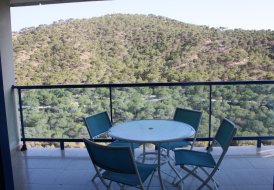 From £472 per week
Mediterráneo Almadraba Holiday A...
Apartment
Sleeps 4, 1 Bedroom 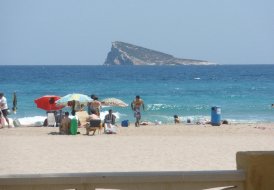 From £601 per week
Apartment To Rent In Benidorm, Co...
Apartment
Sleeps 5, 2 Bedrooms
View all properties in Villajoyosa
Add to wishlist Added to wishlist