Beach apartment with 2 bedrooms and 1 bathroom in Chipiona, Spain

Apartment to rent in Chipiona, Spain

About 300 meters from the beautiful beaches of Regla and Camarón is this magnificent apartment on the first floor of a villa built in a very quiet area of single-family homes. The owner lives on the ground floor of the house; it is about two totally independent houses one from the other.

Particularities of the house:
Occupation: 4 people
Bedrooms: 2
Bathroom: 1
Approximate living space: 100 m2 (including the terrace)
Approximate surface of the terrace: 30 m2
Approximate surface of the plot: 200 m2
Air conditioning (cold / heat) in living room and bedrooms.
Garage space for one car (Included in the price).
Internet connection by cable and by wifi. (Free).
Satellite TV: National and foreign channels.
Large terrace of 30 meters with awning and garden furniture.
Solarium.
Garden (Shared with the owner who lives in the ground floor of the house)
Chairs, sun loungers and umbrella to take to the beach.
Andalusian Tourist License: VTF / CA / 01397

The terrace.- It has about 30 m2, it is very sunny, it has south orientation and the sun gives in it from very early until late afternoon. It is covered with an awning, which can be take off completely or partially at will. In it there is a table and four armchairs with their cushions and loungers, chairs and umbrellas for the beach. The terrace, which is protected from the view of neighboring houses, is ideal for sunbathing, eating outdoors, reading in the evenings or enjoying summer nights. From the terrace you can access the roof.

The dining room.- There is a dining table and four chairs, a convertible sofa that converts into a double bed of 135 x 190 cm, an entrance console and a silversmith furniture. It has air conditioning and heating, internet connection by cable and by wifi and satellite television (national and foreign channels).

The master bedroom. - Has a double bed of 135 x 190 cm., Two bedside tables and a built-in wardrobe. It has air conditioning, heating and wifi. Upon request, a cot can be provided.

The bathroom.- There is only one bathroom, with a shower, a 135 cm bath, a bidet, a toilet, a washbasin and a hairdryer.

The garage.- It has a garage space for one car.

Activities in the area:
In Chipiona and around Chipiona you can see and practice a lot of activities. Of course everything about the sea and the beach, such as fishing, swimming, surfing, snorkelling, scuba diving, sailing, water skiing, etc.
We can also practice golf, tennis, horseback riding, boating, beach walking, biking.
Chipiona has numerous restaurants and bars.
And not far away two parks declared Biosphere Reserve: The Park of Doñana Natural Park of Grazalema.

Getting there:
Chipiona it is located to 54 km. Of Cadiz, the capital of the province. From her, it is acceded to Chipiona by the A-4 (Madrid-Cadiz), until El Puerto de Santa Maria and we will take the A-491 there that will take to Chipiona.

If we come from the north, from Sevilla (to 105 km.) we will take the AP-4 until Jerez de la Frontera and the A-480. Also we can leave the AP-4 in kilometer 44, in the population of Las Cabezas de San Juan and to continue until Chipiona by the A-471 and later the A-480.

Several companies of buses dedicate to the transport of travellers by Road between this and other villages.

How is the area?
The quiet town of Chipiona, is located northwest of the coast of Cadiz, on the Costa de La Luz, just 52 km. Cadiz, the capital of the province is the oldest city in the West (3,000 years).

The origins of Chipiona goes back to Roman times. The most emblematic monument in Chipiona perhaps its lighthouse, which dates from 1867 and is built at Punta del Perro, in the same place where Quinto Servilio Cepión, the tower was built in 140 BC.

We can also see the Shrine of Nuestra Señora de Regla, with its Moorish cloister of the XV century and the image of the Virgin (twelfth or thirteenth century). The Parish of Nuestra Señora de La O (XVI century), the Castle was probably built on another of Arab origin around the year 1295 and the Fisheries Corrales (believed to be Roman).

From Chipiona, you can visit the wineries, the School of Equestrian and the Racing Circuit (in Jerez), the horse racing on the beach (in Sanlúcar de Barrameda), or to the Route of the White Towns in the Sierra de Cadiz, north of the province. The route enters the Grazalema Natural Park, declared a Biosphere Reserve, a must for those who enjoy active tourism and rural tourism.

And not far away, across the river, another natural park, the Doñana Natural Park.

In the area of Chipiona you can see and practice a lot of activities, but especially we can enjoy its 12 Km. of magnificent beaches of fine golden sandy, some of them, awarded with the Blue Flag of the Clean Seas of Europe.

This apartment has 1 verified review.

1 out of 1 people recommend staying here

Within 10 minutes walk of the town and two beaches and with a large terrace for sunbathing the property was all that we were looking for. The apartment was clean and well fitted and the owners were unobtrusive but helpful if needed.

Delightful! We had a great week in a comfortable and well appointed property. Antonio was very courteous and unobtrusive but provided all we needed in terms of accommodation. We would highly recommend this spacious flat in a quiet street.

The couple that owned the property did not speak English, only Spanish, this we found great, they left us alone but made sure they were available for any problems we might have (we had none). Clean...Very well equipped apartment.. Very central, you have to walk to get anywhere which is fun (all the streets are one way as they are so small). I really cannot find a fault, if I was visiting that region again I would be happy to stay there. For my family and myself it was Excellent.

Hemos pasado nuestros vacaciones (10 días) en casa de Antonio. En la casa hay de todo que es necesario para vacaciones perfectas. Aunque los anfitriones viven debajo del piso tuvimos nuestra privacidad y nunca hemos oído algo de los demás. Cuando estamos la próxima vez nos alegramos ser de nuevo sus inquilinos. Recomendación 100% Muchas gracias a los dos! We have spent our vacations (10 days) at Antonio's house. In the house there is everything that is necessary for perfect vacations. Although the hosts live under the floor we had our privacy and we have never heard anything from others. When we are next time we are glad to be your tenants again. Recommendation 100% Thank you very much to both!

We would recommend this clean and well equipped apartment. The owners are friendly and helpful. We look forward to returning there.

The apartment is modern, well equipped and maintained, clean, and comfortable with its own pleasant terrace. It is located in quiet and peaceful surroundings,10 minutes walk from the beautiful Playa de Regla, and food shops are close by.

We stayed in Antonio and Mari’s apartment for a month and found it very suitable for our needs. It is on the upper floor of a charming Spanish-style house and is clean and spacious. It is as shown in the pictures, except with a flat-screen TV now! We made full use of the large terrace, washing machine, laundry lines on the roof, and even the beach chairs that were provided. The Cathedral, Lighthouse, beach, pedestrian street with shops, and several grocery stores are within walking distance. Antonio and Mari live downstairs and were always available, while still affording us privacy. Responses to our emails were prompt and friendly. Antonio, Mari, and their family are very pleasant, and we enjoyed their greetings and smiles. October 2016

This apartment is ideal for people who enjoy quiet, residential surroundings because it is situated at 10 minutes walk from the beach, and 15 minutes walk from the town centre shops and restaurants. There are three small but excellent local shops, including a butcher, all within 5 minutes walk, and all offering very helpful service and a perfectly adequate range of produce for self catering. We have already booked for 2014. The owner and his wife are very pleasant people.

My family and I spent all in all 5 weeks in Mr. Fernandez`s house (June, 30-August,1)and enjoyed it very much. Chipiona is a tiny, quiet village, ideal for couples with kids. The house is situated 10-15 mins walk from the city center and about 5-7 mins from a great beach. The house itself is very comfortable, everything is thoughtfully equipped, so you do not need to bother about anything, during your stay. The owner and his wife were very helpful. The communication was immediate and went smooth whatever we wanted, whether it was Internet access, or a lift to the airport at 4:30 am (!!!) Antonio was always ready to help. I would definitely recommend the house and its owners. Thank you very much!

Outside this apartment in Chipiona, Spain

This apartment is in the town and near a lively area and the beach. It has a balcony, a garage, outside lighting, a garden and a shared garden. Car hire is not necessary as the apartment is less than a 15 minute walk to a large selection of shops, bars, restaurants; however parking is available if required.
Prices & availability

Hello, my name is Antonio and I'm married to Mari. I am currently retired, but during my entire working life I have worked in a bank. I have been assigned to numerous branches in different places, but now I have my residence in Chipiona.
Chipiona is a very quiet town on the coast of Cadiz, has 19,000 inhabitants, but in the summer months can multiply by ten its population as it is one of the main tourist destinations of the Costa de la Luz. It has 3,000 hours of sunshine per year, the winters are short and mild and the summers, although hot, are much less than in the interior of Andalusia. It has magnificent beaches of golden and fine sand, awarded with the Blue Flag of the Clean Seas of Europe and with wonderful sea promenades, where we can stroll, sunbathe or enjoy the sea breeze.
I hope you like Chipiona as much as I do, enjoy your holidays, and want to repeat again.

Hello, my name is Antonio and I'm married to Mari. I am currently retired, but during my entire working life I have worked in a bank. I have been assigned to numerous branches in different places, but now I have my residence in Chipiona.
Chipiona is a very quiet town on the coast of Cadiz, has 19,000 inhabitants, but in the summer months can multiply by ten its population as it is one of the main tourist destinations of the Costa de la Luz. It has 3,000 hours of sunshine per year, the winters are short and mild and the summers, although hot, are much less than in the interior of Andalusia. It has magnificent beaches of golden and fine sand, awarded with the Blue Flag of the Clean Seas of Europe and with wonderful sea promenades, where we can stroll, sunbathe or enjoy the sea breeze.
I hope you like Chipiona as much as I do, enjoy your holidays, and want to repeat again. 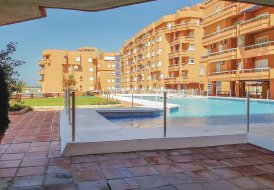 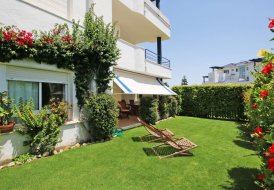 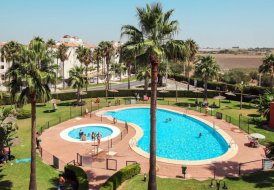 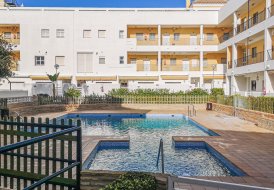 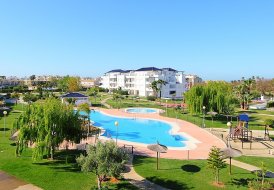 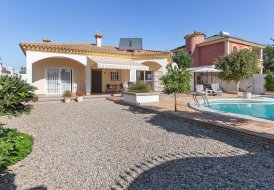 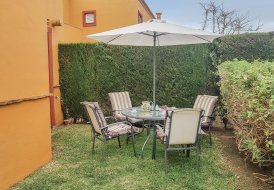 From £539 per week
Villa To Rent In Costa Ballena, C...
Villa
Sleeps 8, 3 Bedrooms
View all properties in Cádiz Province
Add to wishlist Added to wishlist