Located on a private waterfront acre, Sea Haven is a traditional West Indian Villa dressed in a miracle of colour. Periwinkle blue exterior, sunshine yellow inside.

Located on a private waterfront acre, Sea Haven is a traditional West Indian Villa dressed in a miracle of colour. Periwinkle blue exterior, sunshine yellow inside, with a barrel vaulted blue sky ceiling. Antiques include a 200 year old twig rocker made by slaves, and tortoise-back mahogany dining chairs which came from Admiralty House in Port Royal and were used by Admiral Lord Rodney, and Horatio Nelson when he was an ensign.

Sea Haven has a total of 4 fully air conditioned bedrooms with en-suite bathrooms. A rough hewn chair in the master bedroom belonged to the Captain of a schooner that plied between the islands in the seventeenth century.
Apart from the bedrooms, other rooms in the villa include: living room, formal dining room and kitchen. Lounging areas like the verandah, patio and gazebo are ideal for intimate gatherings. The living room opens wide to the 60" foot verandah, which is a feast of pickled wicker, draping vines, and more colour.
The garden consists of just under an acre of tropical shrubs and trees, the trunks of which are smothered with orchids. Fruit trees abound and an exotic alamanda vine shades the entry.

There is also a perfect half moon pool, 21' x 11', tiled with ocean blue mosaics, with a bench, heater, air blower and 16 jets, as well a hammock and gazebo. A bird "feeding tree" frames the view and dapples the gazebo, and in the afternoon, the plunge pool. On one side of the waterfront is a built-up sandy area, and on the other cut-stone steps lead you to perfect snorkelling and the off shore raft.

The butler is the chef and will serve you in the dining room, on the verandah, or "al fresco" by sunlight or by candlelight, according to your whim. Relax in the warm glow of the sunset from across the bay. There is also a cut-stone barbeque grill on the exterior
Less than an hour from Montego Bay's airport, Discovery Bay is absolutely unique, an incredibly clear, blue, beautiful and placid body of water, a perfect sheltered horseshoe bay, one mile across, protected by coral reefs.
This “strip” of houses on the eastern shore is colloquially known as both “Millionaire's Row” and "Jamaica's Riviera". It is now the villa destination of choice in Jamaica.

Sea Haven on Discovery Bay is a 4-bedroom villa with a private swimming pool in a superb location.

On the north coast of Jamaica, situated between Ocho Rios and Montego Bay, you'll find beautiful, scenic Discovery Bay.
It's a peaceful, relaxing and quiet area... and displays one of the most picturesque series of gleaming blue bays... perfect white sandy beaches... and vibrant, lively fishing villages. If traveling to Jamaica, Discovery Bay is definitely a stop you'll want to make - not only for the scenery, but the historic value as well.
Discovery Bay is a town in the Saint Ann Parish on the northern coast of Jamaica. It came to be known as Discovery Bay as Christopher Columbus and his crew had discovered it in 1494.Discovery Bay is home to much history, orginially named Puerto Seco by Christopher Columbus because there aren't any permanent rivers flowing through it, unlike it's neighbouring towns.

It later came to be known as Discovery Bay as Christopher Columbus and his crew discovered it in 1494, (it is disputed as to whether they first landed in Discovery Bay or Sevilla La Nueva.) Due to this there are many historical attractions in Discovery Bay, including the Green Grotto Caves and Columbus Park. The Green Grotto Caves display relics of the native Taino Arawak lifestyle - you can also visit the secret caves through which many spaniards escaped when the english invaded in 1655, they were guided by the Arawaks and African slaves in exchange for their freedom.

Discovery Bay holds some of Jamaica's premier attractions, including Doplhin Cove, where the whole family can enjoy swimming with Dolphins in a beautiful coral reef, and Firefly, Noel Coward's home in the hills above Port Maria, located in one of the island's most spectacular settings, and arguably the best views in Jamaica.The attractions in Discovery Bay are endless, whether you would prefer a drive through fern gully to experience breathtaking tropical vegetation or a visit to Chukka Cove to take part in activities ranging from polo to trail rides.

For those who wish to experience a taste of Jamaican night life there are several restaurants and clubs at Island Village - the most recent shopping and entertainment complex in Ocho Rios, also with shops and a cinema. In Discovery Bay there is no shortage of mouthwatering foods to tuck into after a long day in the sun! The gorgeous 'The Ruins' is built surrounding a waterfall and stream in a semi outdoor setting where you can enjoy both Jamaican and Chinese cuisine, and 'Tuscanini's' - a favourite place to dine for both locals and tourists.

This villa does not have any reviews but the agent has 13 reviews for their other properties.

Outside this villa in Discovery Bay, Jamaica

This villa has a pool and a barbecue.
Prices & availability 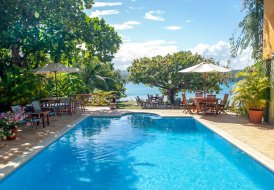 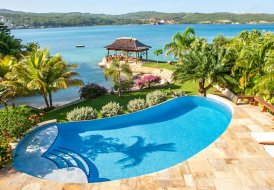 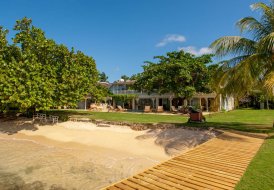 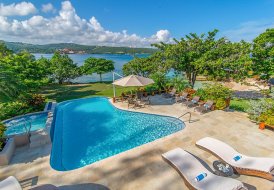 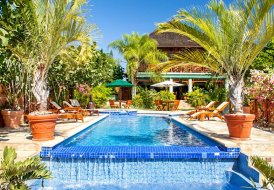 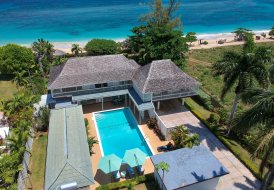 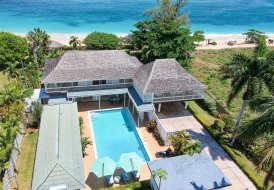 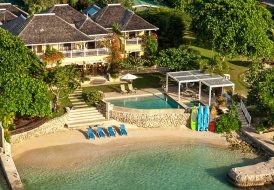 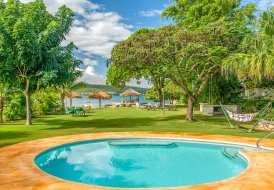 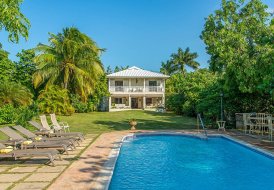 From £4,295 per week
Villa Discovery
Villa
Sleeps 10, 5 Bedrooms
View all properties in Discovery Bay
Add to wishlist Added to wishlist