Villa with 2 bedrooms, 2 bathrooms, private pool and golf nearby in Pula, Sardinia

Villa to rent in Pula, Sardinia

Pula town is really nice and well known, with its white sandy beach (SantEfisios, 15 minutes driving from the apt), the archaeologic area of Nora, and its Piazza with the cafès and summer theatre and music.
At 10 minutes distance from the apt there is the Is Molas Golf Club, at 20 Km distance the Chia Laguna beaches and lagoon.

horse-riding
in front of the garden there is the horse-riding club. Stefano will offer you special prices for lessons and excursions

Nora archaelogical area. Deers and wild boars
The ancient city of Nora is positioned on the furthest point of Cape Pula, in front of Pula town, surrounded by the sea, connected to the mainland by a tiny isthmus. Thanks to the ancient traders Nora was developed into an unique and important point for the entire Sardinia isle.
The name of the city is derived from the root word “nur” the same as that wich has been used for the ancient prehistorical Sardinian sites, the “Nuraghi” towers.
In fact, many megalithic stones were discovered at Cape Pula and were later utilized for the Nora city’s buildings.
Nora’s story began during the early 8th century B.C., when the Phoenicians, sailors and traders from the Mediterranean, decided to use that site as one of their first strongholds on the Sardinia island as confirmed by the most famous and ancient written document ever discovered in the Mediterranean, the “Stele” of Nora.
Around the 6thcentury B.C. the Punics, inhabitants of Cartage city, located in the North African coast (now, Tunisia) were seen for the first time around the coast of Nora. It was during that period that the city of Nora really began to take shape: sacred buildings on the higher slopes and around the foot-hills, the residential and commercial districts, an extremely large number of water and storage tanks. It is from that moment on that Nora really became an important reference point for the commercial traders crossing the Mediterranean.
However, it was during the Roman period, from the 227 B.C. year, that Nora reached the peak of its expansion and development. Some of the original Punic buildings were destroyed or modernized by the Romans.
During the 1st century ad, Nora officially became a roman Municipium, and lot of monumental buildings were erected, most of them still visible today: the Forum, the teathre, four thermal baths, temples, huge mansions and villas, the insulae, the aqueductus and, last but not least, the amphitheatre, wich unfortunately has been destroyed.
During the 5th century a.c. started the Nora decline, the Mediterranean coastlines became dangerous and Nora, as the other coast cities of Sardinia, became prey of the devastating strength of Vandals then, during the 8th century a.c., the Saracens violently attacked burning the city almost to the ground, forcing the remaining inhabitants to flee towards the inland areas, where they gave birth to the new village of Pula.
The defense tower on the peak of Coltellazzo was built during 1595 from Spanishes, as part of the Sardinian coast protection program.
at 15 minutes distance driving from the apt there are the Gutturu Mannus mountains and forest (the larger forest of Sardinia) where you can have a walk and see and hear, expecially in spring, deers and wild boars.
You can even reach the forest by bycicle or by feet from the apt (bycicles are provided)

This villa has 5 verified reviews.

5 out of 5 people recommend staying here

We had a lovely stay at this villa. The pictures don't do it justice - it was surprisingly large and spacious and in a lovely quiet country setting. We had a wonderfully relaxing holiday and would certainly recommend it.

We would highly recommend this villa set in large well maintained green grounds. The pictures do not show you how big the property , the grounds and the pool are. The pool much bigger than your average pool, at least 10x5 meters. The grounds are enormous, covered with lush grass and olive trees everywhere. Ample outdoor equipment. Large attractive veranda looking onto the pool and grounds. Every room is Air Conditioned. You will have the house to yourself - so extremely private. We felt privileged to stay in the house as it felt like visiting someones home; very well furnished and well equipped with everything you could possibly need. A good Supermarket is 5 minutes drive away. Similar distance to Pula and its many good restaurants serving great regional food and very reasonably priced. Local Nora beech looks nice but we mostly drove to the many beaches in the Chia region , our favourites were the uncrowded Spiaggia Colonia and Spiaggia Piscinni (30 mins away). Stefano our host was wonderful and very helpful and recommended Ristorante Pizzeria Da Giancarlo which turned out to be our favourite. There is also La Bottega (fish speciality) and can be walked to or driven to in under 5 mins and is well worth a visit or two.

Many Thanks for a memorable week - Hopefully see you next year!

Thanks a lot. It was a real pleasure to have you as guests! I Hope to see you next year!

Thanks to Maria and Manolito for a wonderful stay in a lovely villa. The house and garden were well maintained and looked after. The pool was a delight and much enjoyed during our 2 week stay. I would have no hesitation in recommending Maria's villa and Sardinia as a destination. The villa was well located near to Pula and many great beaches. Looking forward to going back :-)

Villa Maria set in stunning grounds, excellently maintained. The villa is equipped with everything you could possibly need, very spacious inside and out, absolutely stunning. Outside has everything, allotments, trees, grassy area, immaculately clean water huge pool, shady areas, chickens, geese, donkeys. Maria and Manolito do everything they possibly can to ensure you have the perfect stay and even bought us supplies of fig fruit from the trees and fresh eggs, peas and basil also available - just ask Manolito, he's around the grounds but so discreet you would never know ... We could only tell he was there when we saw his car or he appeared with his huge smile offering fresh produce. Perfectly located with riding stables next door, golf just down the lane and farm restuarant around the corner, jump in the car and 5 minutes you are in Pula town, supermarkets, shops, restaurants, beaches are gorgeous and plenty to choose from.
We had the privilege of staying for a week in August and really wish we had booked for longer! We definitely plan to return and have a longer stay. Missing everything about Villa Maria, we were very sad to say goodbye. A real treat *****

The pictures on the web does not do this place justice. The villa is set in a secure, large well maintained garden, secluded on one side by tall trees & on another by fruit trees. Within the grounds is a vegetable patch that provides a great variety of free veg that the owner makes available for the guests. The pool is of a good size that keeps young ones occupied all day. Bruno is a gent and very helpfull. The villa comfortably sleeps 4 but as in our case, can accomodate 5. The place has everything that you could ask for in the kitchen/utility/sitting room to make it an excellent place. Cleaned thoroughly twice a week. Maria and her staff made us feel most welcome - will definatley come back again (something I have never done before with my previous holidays).

"A beautiful villa set in beautiful grounds with a lovely fresh clean swimming pool. Just a 5 minute drive from the picturesque Pula town and next door to a stables which proved a hit with the children. Lovely terrace area and plenty of space to sit round the pool or relax in the spacious villa with all you could ask for in the kitchen" Gareth and family, Kent, UK (june 2011)

Outside this villa in Pula, Sardinia

This villa is in the countryside and in a quiet area near the mountains. It has a pool, a barbecue, outside lighting and a garden. Car hire is necessary as the renter will need a car to get about for shopping, eating out and the beach; however parking is available if required.
Prices & availability

There is also 2 single sofa beds in in the sitting room, 1 cot 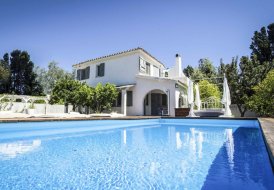 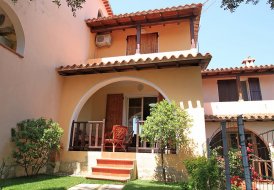 From £199 per week
Is Molas
Apartment
Sleeps 4, 2 Bedrooms 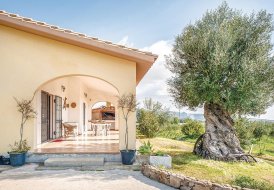 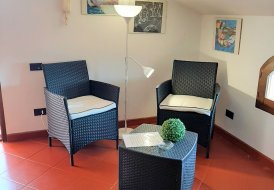 From £538 per week
Villa Contini
Apartment
Sleeps 3, 1 Bedroom
View all properties in Pula
Add to wishlist Added to wishlist