Apartment with 2 bedrooms and 1 bathroom in Rochefort-du-Gard, the South of France

Apartment to rent in Rochefort-du-Gard, the South of France

Very spacious for two, perfect for a romantic getaway.

We are at the base of the Rhone valley,an area rich in culture and traditions, at the centre of a triangle: Avignon, Nimes and Orange.

We will rent our apartment for less than 7 days, ask us for a quote.

Suitable for independent travellers, who like to organise their own holiday.
General

The Department (county) of Gard is unique in France, if not the world because of its diversity of landscape, which range from the mountains of the Cevennes, to sand beaches and the Rhone delta (Camargue). I would recommend that you come by car or at least hire one if you fly. The adjacent departments: Vaucluse, Bouches du Rhone, Ardeche and Heraut, all have many interesting sites and are easily accessible by car because of Frances excellent road network, which usually has very light traffic.

There are many flights to our region if you decide to fly and drive: Ryanair flies to Nimes from Luton and Liverpool (daily). It is possible to fly to Paris and catch a TGV(very fast train), Station at Charles de Gaule. To Avignon, it takes 2 hours 45 mins.

In the 14th century, Avignon became the centre of Christianity. On this trail you will come across a host of edifices that reflect the hectic endeavour of the pontifical court during this era. The imposing Palais de Papes.

The bridge of the song, which spanned the river by way of the island, was 900m-975yds long when completed in 1190 and was for years, the only crossing so far down the Rhone.

The Camargue, the most original and romantic region of Provence and possibly France, Black bulls, white horses, French cowboys and pink Flamingoes.

Roman Ampitheatre and theatre. Van Gogh lived here and after a visit by Paul Gaugin they quarrelled and he cut off his ear.

A fortified medieval village which has been featured on many television travel programmes.

The largest natural spring in the world: a river flows out of a cave at the base of a sheer cliff 400 metres high.

As wine-producers: Cotes du Rhone Named Village (there is only Cru class above this category) and Cotes du Rhone, we can give our clients information about local wines. The majority of our grapes are vinified at the local cooperative.

During September would be able to observe the harvest and the grapes being processed at the cooperative. Note that during this period we consider our harvest to take priority!

We have a selection of books on wine that clients may borrow.

There is small market on Sunday morning in our village, you able to buy various cooked meats.

Villeneuve les Avignon there is a large market on Thursday morning and an antiques market on Saturday, 10 minutes away.

Uzes there is a large market on Saturday morning, 20 minutes away.

Les Angles a market on Saturday morning, 10 minutes away.

Description
The owner of the above project is British and has lived in France since 1987 and has been involved in viticulture since 1984. The property in which the Gite is situated dates from at least the 17th century, and has vaulted ceilings. We are located at the junction of the A9 (motorway to Spain, 10 minutes to an entrance) and the A7 (motorway to Italy, 20 minutes to an entrance). The Rhone valley, an area rich in culture and traditions, attracts millions of visitors each year. Our village is at the centre of a triangle: Avignon, Nimes, Orange.

The gite is situated on the ground floor of the owners' house in the centre of a medieval village. For people who enjoy close contact with French culture the situation is difficult to match. It sleeps four and the price ranges from €378-€480 per week. The prices are for two people renting, if three people rent add €40, for four add €80.

Stone fire place with an insert fire (glass door) fuel is included in the price. The stone comes from a quarry close to the Pont du Gard (same stone). A large oak table four chairs. Two armchairs and a settee. A radio. There are books on wine and novels. The ceiling is vaulted. Satelite television: BBC and ITV3.
Sink, fridge, dishwasher, combine oven microwave, two electric hobs, coffee machine, kettle and toaster. There is a cooker hood and the kitchen is connected to the main house's ventilation system.
Sleeping Area: adjacent to the main room contains two single beds which can be pushed together to form a double bed, when the sleeping area is not in use it can be closed by means of oak doors. There is also a double bedroom.

This apartment has 22 verified reviews.

22 out of 22 people recommend staying here

The little apartment was great, very roomy and greatly located in Provence to take the car and explore the region. There are not too many restaurants in the village, but if you take the car you have tons of choices about 15 mins away in Avignon. The views are incredible, walking in the village is superbe. The owners are great, helpful and very nice.

Private parking place is very helpful in this area. We already want to go back to Provence, and if we do we will definitely stay there again.

Thank you Josiane and Arthur for a great stay.

We were very pleased to hear that you enjoyed your stay.

Perfect guests well organised knew what you wanted to do and got on with it.

Thank you for the condition that you left the apartment in, we would be very pleased to have you stay with us again.

We were very happy with all aspects of the holiday and the gite. Mrs. Cook could not possibly have been kinder or more helpful. My only area of grumble is that I found the booking form a little frustrating. And it was annoying that I was unable to communicate directly a little earlier in the booking process with the owner. You told me that I still owed £200 even though I made a late booking and therefore paid in full. I communicated this to you, received a reply from Mrs. Cook but then could not answer her email and had to go to you again.
But overall we were very satisfied. T. Sanderson

We spent a very happy week here. The property surprised us by how spacious it was. It is very obviously converted from a very old building, but the conversion has been well done.

The only drawback is that the outside seating is across the road (although not that far) and outside Summer its a shame that its in shade.

When Mr and Mrs Bush stayed it was late September, temperatures were dropping, having a place to sit outside in the shade is a huge advantage in our climate. The seating area is only in the shade in the afternoon from 2pm and clients are welcome to move the furniture to another area that is still in the sun.

Very satisfied and the owners were helpful and very friendly. Situated in a great area and will stay there again.

We thoroughly enjoyed our time here. We booked for 3 weeks to were a bit nervous about how it might be. We wanted to spend time in a genuine French village rather than a city. It was everything we thought it would be, in fact the services in the town were better than we had imagined.
We used public transport for most of the time which worked out fine for us. We also rented a car for some days to explore further afield and this was a necessity for doing that.
Arthur and Josieann were very busy in the vineyard but were always easy enough to catch later in the evening when we needed them. They were a good help to us.
We would definitely recommend this place to our friends and a return trip.

Rocheford-du-Gard made a perfect anchor for our exploration of the Roman ruins of Orange, Arles, Vaison-les-Romains, and Nimes. Arthur and Josiane were welcoming, and a roaring fire in the hearth greeted us upon arrival. If you go in the springtime, be aware that the tile floors can be cold. The village is charming, with two excellent boulangeries within a short walk. There is only one restaurant in town, so if youre not planning to cook dinner, be prepared to drive into Avignon or Villeneuve for dinner (we actually worked dinner into several of our day trips and found wonderful restaurants further afield in Avignon, we loved Piedole and La Fourchette). Our only caveat on renting this gite is if youre tall and used to a queen-size bed, the bed will feel short. Im 510" and my husband is 62" and neither of us could stretch out full length because of the footboard on the double bed. But that was a small thing and would not preclude a return visit or a hearty recommendation to others to stay here.

Outside this apartment in Rochefort-du-Gard, the South of France

This apartment is in the countryside. Car hire is necessary as the renter will need a car to get about for shopping, eating out and the beach; however parking is available if required.
Prices & availability

In the yard where you park your car there is a table with four chairs and two sun-loungers.

We are an Anglo/French couple who have over 20 years experience at producing grapes for Cotes du Rhone and Cotes du Rhone Village. Recently producing our own wine under our brand Domaine de Palejay, we use sustainable methods and respectful of bio-diversity. Before this I was a teacher.

We are an Anglo/French couple who have over 20 years experience at producing grapes for Cotes du Rhone and Cotes du Rhone Village. Recently producing our own wine under our brand Domaine de Palejay, we use sustainable methods and respectful of bio-diversity. Before this I was a teacher.

Similar holiday rentals around Gard, the South of France 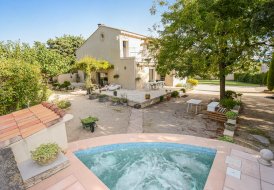 From £379 per week
Holiday Villa In Pujaut
Villa
Sleeps 8, 4 Bedrooms 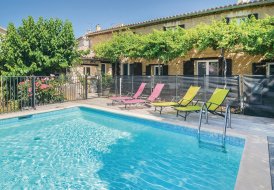 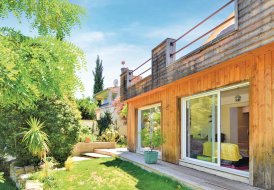 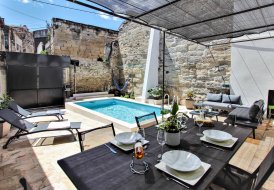 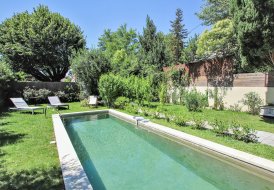 From £240 per week
Villa To Rent In Barthelasse-piot...
Villa
Sleeps 4, 1 Bedroom 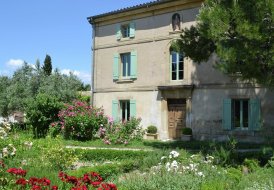 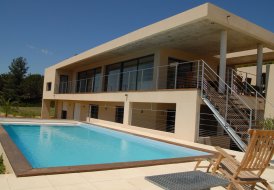 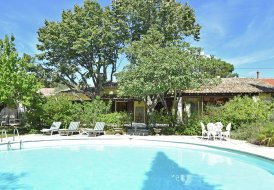 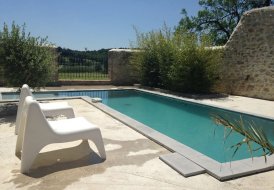 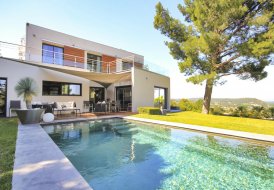 From £4,081 per week
Villa Sublime
Villa
Sleeps 8, 4 Bedrooms
View all properties in Gard
Add to wishlist Added to wishlist