This is a modern 2 bedroom ground-floor apartment in a quality development. Situated near the Tombs of the Kings and 200 metres from the beach, the superb sea views, south facing aspect and landscaped garden and pool area make this apartment a ‘cut above the rest’

With patio and garden areas to front and side, sun loungers for everyone, gas barbeque and ‘Al Fresco’ dining area, you can relax in the sun all day and then watch the sun set on your private sea view whilst enjoying your favourite tipple!

The apartment is part of a complex with full use of 2 pools, one for kids and a large family pool.

There are plenty of local restaurants and bars within a 5 minute walk of the apartment and the popular areas of ‘Coral Bay’ and the ‘Harbour’ are within a 10 minute drive, where numerous Greek and English restaurants and Tavernas can be found.

There are 2 bedrooms, 1 double and a twin, a bathroom with W/C and also a designated car parking space if needed.

All rooms have air conditioning to keep you cool in the summer heat!. Air con is included in the price of your holiday.

WiFi is available free of charge and English TV and catch up available as standard.

Whether it’s a relaxing sun kissed holiday, an action packed adventure or a cultural and historic experience you’re after, you’ll be sure to find it here.

Enough clean linen is available for weekly changes. A washing machine is integral to the kitchen.

With a population of just 28.000 Pafos nestles In the lee of the Western Troodos Mountains, which add another dimension to this area of scenic beauty. The recent addition of its own international airport nearby has opened up the Pafos area, and the resort is graced with some luxury hotels along the coastline.

Pafos has an air of holiday charm combined with history, and olden-day elegance is lent to the town by its classical style buildings in the upper part of town which leads to the shopping area. The lower part of the town - known as Kato Pafos has a life of its own albeit so close by, down near the sea -home of the harbour, the fish tavernas, souvenir shops and several beautiful hotels with important archaeological sites around them.

Pafos is entwined with Greek mythology, and the legendary birth of Afrodite on her shores brought fame and worshippers there to follow the cult of the Goddess. Landmarks associated with Afrodite are the chunky, rugged rocks of her beautiful birthshore known as the Afrodite Rocks or "Petra tou Romiou", the evocative sanctuary of Afrodite at Kouklia Village, one-time shrine and scene of pagan festivals for thousands, the Baths of Afrodite at Polis, supposed source of fertility and the Fountain of Love, or Fontana Amorosa, a few miles further into the Akamas Peninsula.

Even the towns name is linked to the Goddess, for Pafos was the name of the mythological daughter of Venus and Pygmalion.

Pafos became the capital of Cyprus under the successors of Alexander the Great - the Ptolemies and in those days its harbour was a busy, thriving port. It continued as the islands first city for more than seven centuries, retaining its importance under Roman rule Its most famous Governor Sergius Paulus, was converted to Christianity by St Paul in 45 AD.

But Pafos history dates back a great deal further. In fact the whole area abounds in historical and archaeological treasures.

Historic Sites
WHAT TO SEE
Just north of Paphos, pristine sandy beaches dot the coastline, some of them home to leatherback turtles. Inland, forest-covered mountains are carpeted with orchids, dark-red Cyprus tulips, rare crocuses and pretty pink thistles, depending on the season, and there are little grape-growing villages and frescoed Byzantine monasteries to explore. The islands rich cultural heritage is easily accessible. Just five minutes walk from the hectic main boardwalk in Paphos are the ruins of its ancient city, Nea Paphos, a huge archaeological site which includes a medieval fortress, a 4th-century church, a Roman villa with stunning mosaic floors, and two vast, frescoed tombs from the early Hellenistic period. For further details, see below:

NEA PAPHOS
Nea Paphos, or New Paphos, is the name given to the sprawling archaeological site that occupies the western segment of Kato Paphos, north of the harbour and west of Leoforos Apostolou Pavlou. This is the ancient city of Paphos which was founded in the late 4th century BC when Cyprus was part of the kingdom of the Ptolemies, the Graeco-Macedonian rulers of Egypt whose capital was in Alexandria. Nea Paphos became an important strategic outpost for the Ptolemies, and the settlement grew considerably over the next seven centuries. The current archaeological sites are being slowly excavated as it is believed that there are still many treasures yet to be discovered. You can easily spend half a day exploring the sites.

AGORA, ASKLIPIEION AND ODEION
The Agora, or forum, and Asklipieion date back to the 2nd century AD and constitute the heart of the original Nea Paphos city complex. Paphos second most popular attraction is an impressive collection of intricate and colourful mosaics in the southern sector of the archaeological park immediately to the south of the Agora. Discovered by accident in 1962, excavations carried out by the Department of Antiquities brought to light remains of a large and wealthy residence from the Roman period with exquisite coloured mosaics decorating its extensive floor area. Subsequently named the House of Dionysos due to the large number of mosaics featuring the god of wine (Dionysos), this complex is the largest and most well known of the mosaic houses.A short walk away are the smaller Villa of Theseus, a 2nd-century private residence, and House of Aion, a purpose-built structure made from recycled stones found on the site and housing a panel of 4th-century mosaics.

HRYSOPOLITISSA CHURCH & ST PAULS PILLAR
This fairly extensive site, still being excavated, was home to one of Paphos largest religious structures. What is left are the foundations of a Christian basilica (built in the 4th century) which aptly demonstrate the size and magnificence of the original church.

TOMB OF THE KINGS
Paphos most popular and most impressive site is the Tomb of the Kings, a World Heritage Site which is 2km north of Kato Paphos. It contains a set of well-preserved underground tombs and chambers used as a necropolis by residents of Nea Paphos during the Hellenistic and Roman periods from the 3rd century BC to the 3rd century AD. The name Tombs of the Kings reflects the majestic appearance of the tombs rather than any royal pedigree of the people buried there.

BYZANTINE MUSEUM
Worth visiting for its collection of icons from the 13th and 14th centuries. Open 9am to 7pm Monday to Friday, 9am to 5pm from October to May and from 9am to 2pm on Saturday

This apartment has 25 verified reviews.

25 out of 25 people recommend staying here

Tony was very easy to talk to when arranging our stay, very helpful, informative and quick to respond to our queries. We stayed for 10 days from 9th May 2019. The apartment felt like a real home from home. We were very comfortable and happy from the moment we were greeted by Janet. The weather was fantastic, hot and sunny everyday. The pretty terrace is a real sun trap, comfortable sun beds, large table and chairs and very private. The local area was lively and bustling, just a stroll away to cafes and restaurants, or jump on the bus to Paphos Harbour...Coral Bay beach in the opposite direction. We walked along the beach and paths to Paphos Harbour a couple of times. Lots to see and do, but we just relaxed and enjoyed the sun, good food, drinks and company on most days. 😊 Back at Kings Palace, we enjoyed the pool and gardens. Lidl being so close was very handy. The apartment felt lovely to come back to. Thanks very much Janet.

An excellent apartment, very clean; in a great spot in a very nice complex. I would stay again without a second thought. The only slight issue was the air conditioning was not as effective in the main bedroom &; lounge area as it should have been.

very good and i would recamend it to every one. you are met by jan and dave who are fantastic also when you leave. the apartment is exactly how they desribe it and the patio was a great sun trap. it was so close to shops, resterants and the bus stop at the bottom of the road to the appartment. it was home from home and we will be going back

We found this to be a well appointed clean and tidy property in a good central location with excellent transport links to the Harbour, Coral and Corallia Bay beaches. Unlimited daily travel for travel for 2 euros each !
The New Lidl store next door was ideal for self catering.
We were well looked after with regard to transfers and knew that Janet and David were there if we needed any other help.
We would recommend this locartion/apartment and would consider revisiting the area.

PLENTY OF ROOM INSIDE NICE BIG ROOMS. PATIO AREA THE SAME ROOM FOR TABLE CHAIRS AND SUNBEDS. BUS STOP OUTSIDE VREY USEFUL IF YOU DO NOT HAVE HIRE CAR. WHICH YOU DO NOT NEED UNLESS WANT TO GO SIGHTSEEING. JUST ONE THING PLEASE CHANGE THE SHOWER CURTAIN VERY DIRTY ROUND THE BOTTOM. BUT DESPITE THIS WE WOULD LIKE TO RETURN NEXT YEAR.

The property was clean and well maintained. We were a bit unused to the manner in which the Air Conditioning worked and it took some getting used to for us. The lovely couple that cares for the property was so helpful and kind that we felt right at home. The hairdryer is the only item that we felt needs to be retired. You cant move it once you switch it on, so you end up trying to move your head instead! Other than that minor glitch, the apartment is well stocked with dishes and appliances for your use.
Stores and restaurants are a brief walk with one hill between the apartment and the main strip of places from which to choose. Taxis came quickly when called and almost every trip was between 8 and 10 euros! Didnt matter where we went, that was the cost...

Outside this apartment in Kato Paphos, Cyprus

This apartment is near the beach. It has a shared pool, a balcony, a barbecue, a children pool area and outside lighting. Car hire is not necessary as the apartment is less than a 15 minute walk to a large selection of shops, bars, restaurants; however parking is available if required.
Prices & availability 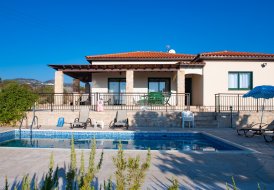 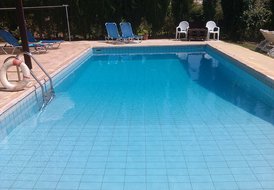 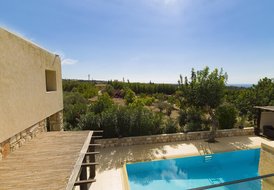 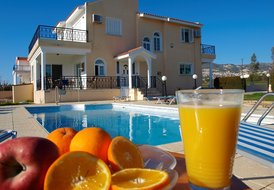 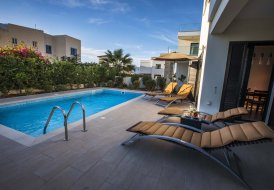 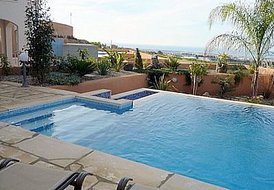 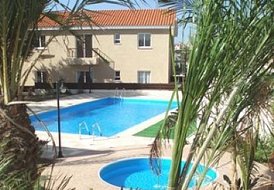 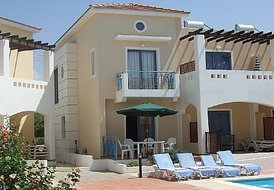 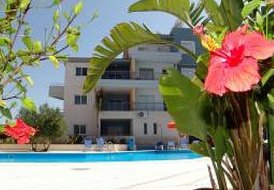 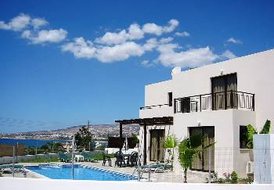