Beach villa with 5 bedrooms and private pool in Stivašnica, Croatia

Villa to rent in Stivašnica, Croatia

Luxury Villa Emilly By The Beach with Private Swimming pool

Villa is located in a small fisherman village right on the beach. Razanj is only 20 min drive from the UNESCO listed town of Trogir and about 40 min to the Dalmatian capital, Split. New modern Villa has five bedrooms, three toilets and two WC. On the main flour there is big living and dining room with fully equipped kitchen. There is also one wc for guests. The all area is 60 m2. On the first flour there are four bedrooms, two bathrooms and one wc. Three bedrooms have exit on the balcony. On the last, second floor there is a main bedroom and one tolaet.
There is a large terrace with panoramic view of the entire bay, and a big BBQ. Villa has big yard with sunchairs and sunbeds near big pool. We are only 40 meters from the beach with crystaly clear water. The local attractions are also waiting for you to explore it, and we can organise a car hire for you.

Villa Emilly is a perfect location for a family getaway out of beaten tourist paths, away from hustle and bustle.
As mentioned above, Razanj is positioned near three sites from the UNESCO's World Heritage List, Split, Sibenik and Trogir.

If you would like to have an unforgettable and pleasant holiday away from the urban commotion Razanj is the ideal location for you. It is a typical Mediterranean village located in a quiet bay situated between the popular cities Split, Sibenik, Trogir, Primosten, Zadar. Our guests can enjoy and relax by the pool, or swim in the Adriatic sea which is only a few meters away from our villa. If you think you will miss the city crowd you can always visit one of the nearby cities and return to your oasis of peace afterwards. Your vacation will be even more complete with boat trips to popular Krka and Kornati national parks, or to explore nearby natural beaches and lighthouses. Trips are available on a daily basis. Razanj has a lot of cycling trails which go through the untouched nature and maybe you will find a beach waiting to be discovered by you. From a nearby hill you can enjoy panoramic view of beautiful islands, hidden beaches and Dalmatian stone villages. In our house you can get a medical massage and rent a bicycle. During your vacation you will have the opportunity to enjoy all the charms of beautiful Dalmatia.
Only 1 km from villa there is Cape Planka which is the most outstretched part of the eastern coast of the Adriatic Sea, and it is a geographical and climate divider of the north and south Adriatic. It is a place of strong north and south collision of wind, cyclones and anticyclones, and sea currents. The largest waves of the Adriatic Sea crash there and on the other hand the sea is as calm as you could possibly imagine. It all creates a stunning natural spectacle which noone should miss because you can neither see nor experience similar things anywhere in the world.
This cape dramatically affects the weather conditions in Dalmatia, especially in Rogoznica where, because of its impact during the three summer months, the rainfall is only 60 mm/month, almost three times less than in the neighbouring cities of Split and Šibenik.
Cape Planka and its mood was first mentioned in the oldest preserved descriptions of the eastern Adriatic coast. It was known to Greek sailors under the name of Diomede’s Cape in the 6th century BC. Homerus in his work ‘Iliad’ reveals that after the Trojan war Diomedes himself, who was one of the greatest heroes of Greek mythology, sailed around it, and Timaeus, a Greek historian, already in 4 century BC described the unusual natural anomaly which it causes. His description of weather conditions over the Diomede’s Cape belongs to the oldest descriptions of a meteorology phenomena in the European culture. Also a Greek scholar, geographer, astronomer and mathematician Eratosthenes wrote about Diomede’s Cape in the 3rd century BC, an important epic poem about the Argonauts took place there, and in the 1st century it was mentioned by Pliny the Elder in ‘Natualis Historia’, the first encyclopedic work of European culture.
One of the miracles attributed to the Christian saint John, the bishop of Trogir from the 11th century is related to Cape Planka. According to the legend, after the shipwreck by Cape Planka he walked on the waves and saved the lives of King Coleman and all the sailors. In memory of him and his miracles, at this place a votive church was built in 1324.

The Church of St. John, a protected site of national religious heritage, is located on Cape Planka in a rugged desert landscape. The church is oriented east-west, and is rectangular in shape with a semicircular apse. The church bears the Gothic feature of the pointed arch and the Romanesque feature of the massive flange, and an even older pre-Romanesque tradition is evident in the division of the interior walls with shallow arches between the pilaster strips. Solid in shape, its thick walls were built on whenever it was possible. Though the church is more than 10 meters from the sea, waves carrying destructive salt still manage to reach it. Over time, they’ve encircled the church with jagged rocks that now form part of the overall structure.

This villa does not have any reviews.

Outside this villa in Stivašnica, Croatia

This villa is in a village and in a quiet area near the beach. It has a pool, a balcony, a barbecue, outside lighting and a garden. Car hire is not necessary as the villa is less than a 15 minute walk to a large selection of shops, bars, restaurants; however parking is available if required.
Prices & availability 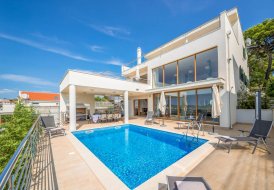 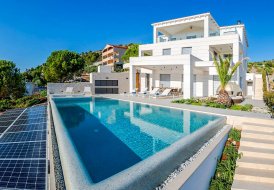 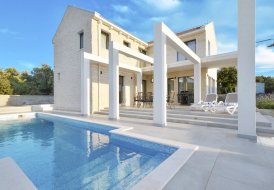 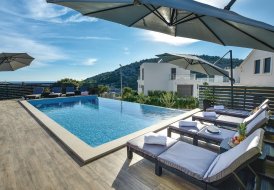 From £580 per week
Apartment In Stivašnica, Croatia
Apartment
Sleeps 5, 2 Bedrooms 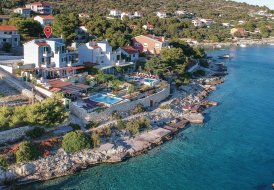 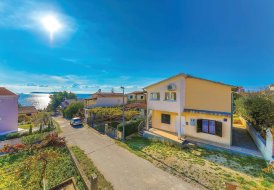 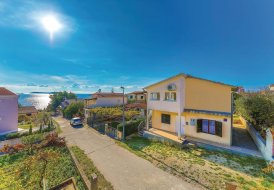 From £249 per week
Apartment To Rent In Zečevo Rogo...
Apartment
Sleeps 4, 2 Bedrooms 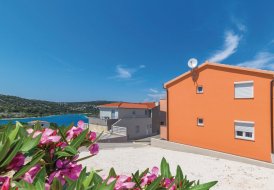 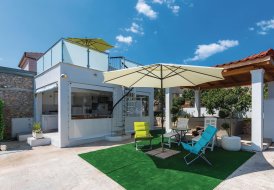 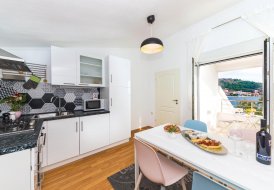 From £390 per week
Croatian Apartment To Rent
Apartment
Sleeps 4, 1 Bedroom
View all properties in Dalmatia
Add to wishlist Added to wishlist