Clickstay on Tour: 3 Days in Paris with Felicity 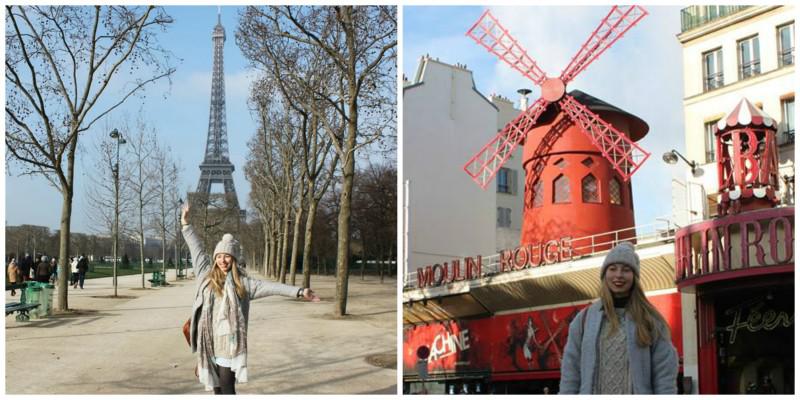 So, this is the first post in a new series called 'Clickstay on tour'...

The Clickstay office is made up of a team of travel enthusiasts - and we love to rant and rave about the places we visit when we take some time off to relax and explore the world. We thought it would be a good idea to start channelling our travel-bug energies into short blog posts which will hopefully provide you with some inspiration for your holidays to come!

Last weekend, our Marketing Executive, Felicity, went to Paris for a long weekend. Here is how she spent her 3 days in the city of romance...

We started off the weekend with a nice long lie-in - "we are on holiday after all" was the resounding attitude - before popping to the patisserie on the corner of our road for some freshly baked pain au chocolat. We ate these on the way to the Metro. Our first stop was the Eiffel Tower, and what a beautiful, clear day we had for it! We had already decided that the weekend was going to revolve around French food so we bought a crepe from a vendor near the tower and gazed up at its industrial beauty. 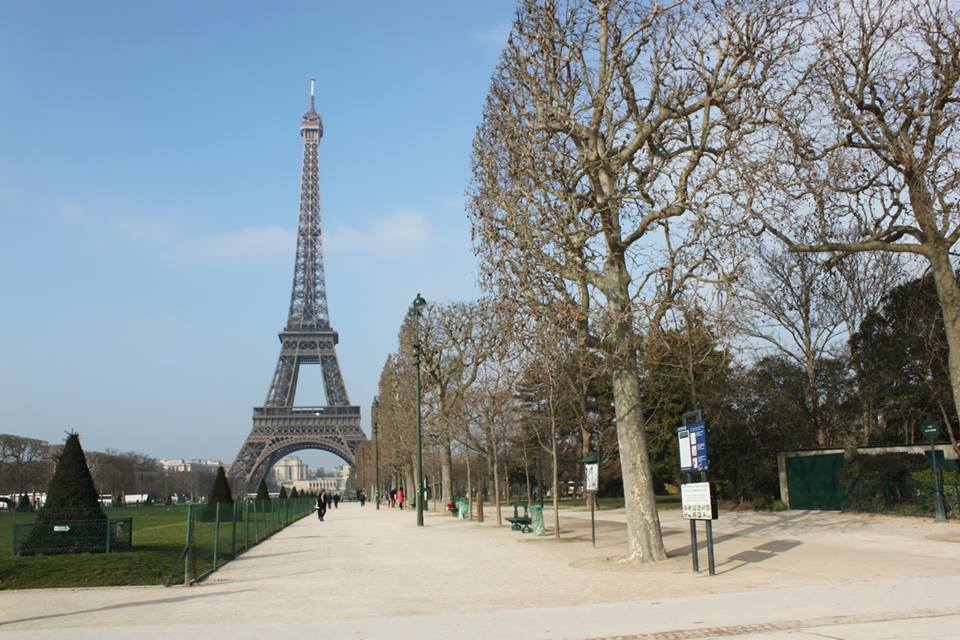 Next, we headed to the Louvre to see the famous Mona Lisa... where I took this Inception-style photo: 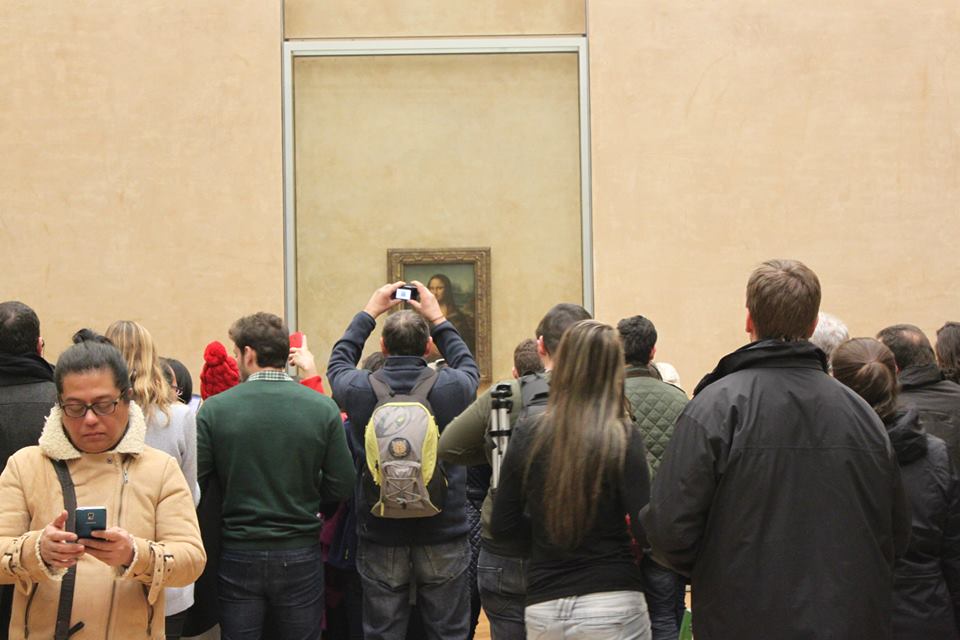 If you look closely, you can see our Mona on the camera screen belonging to the chap in front of me. That is about as close as I got. But still, I was in the same room as the Mona Lisa, which is pretty cool. I was very impressed with the Louvre. Not least because my friend, Philly, and I got free entry into the galleries because we are under 26 years and from the EU. We later realised this is the policy with most of the museums in Paris, so we ended up spending a lot less money than we thought - but proceeded to spend said saved money on ridiculous quantities of French bread, cheese and wine. Of course.

On our second day, we ventured to Montemarte, which is just north of the city centre and is the setting of one of my favourite French films - Amelie. Everything reminded me of the movie, so I was wandering around in a happy daze. If you haven't seen the film, you absolutely must, and preferably just before you make a trip to Paris. We walked up the hill to the Sacré Coeur - a stunning white stone Catholic church - and the view from the top was stunning. I could see the whole of Paris from up there. Just watch out for the blokes who try to sell you friendship bracelets, they can be a little aggressive. And trust me, they are only referring to you as "sexy boom boom" in order to grab your wrist and tie a piece of string around it. 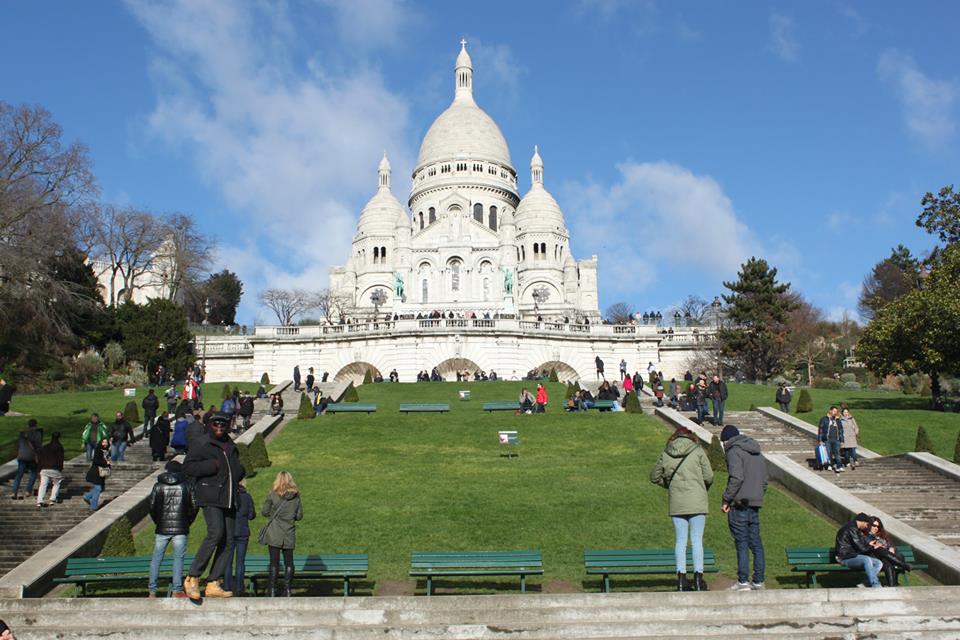 In the afternoon, after a big bowl of steaming French onion soup, we headed to the seedy area of Pigalle. This is the home of the Moulin Rouge, which is a shadow of what it's made out to be in Baz Luhrmann's epic film. I was expecting a lot more glitz and glamour... but perhaps I'd been a little naive.  Here's a photo of me outside the front of the famous theatre: 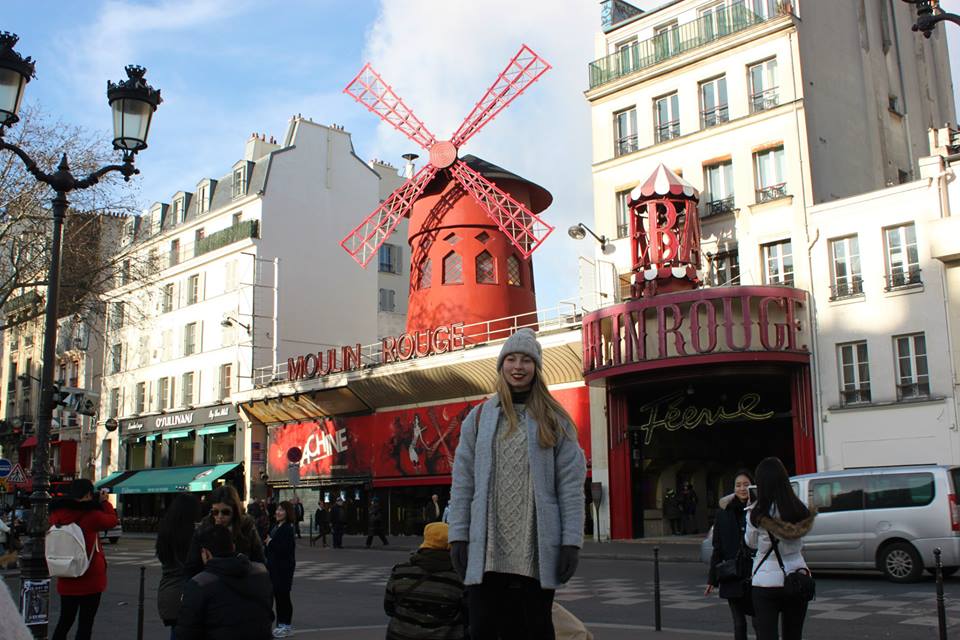 To round the day off, we headed back to the city centre to check out the Musée d'Orsay. I've never seen so many famous paintings in one place - Monet, Degas, Van Gogh. 'Starry Night' is even more beautiful in the flesh. And the museum building itself is pretty incredible. I took a sneaky photo as you're not really allowed cameras: 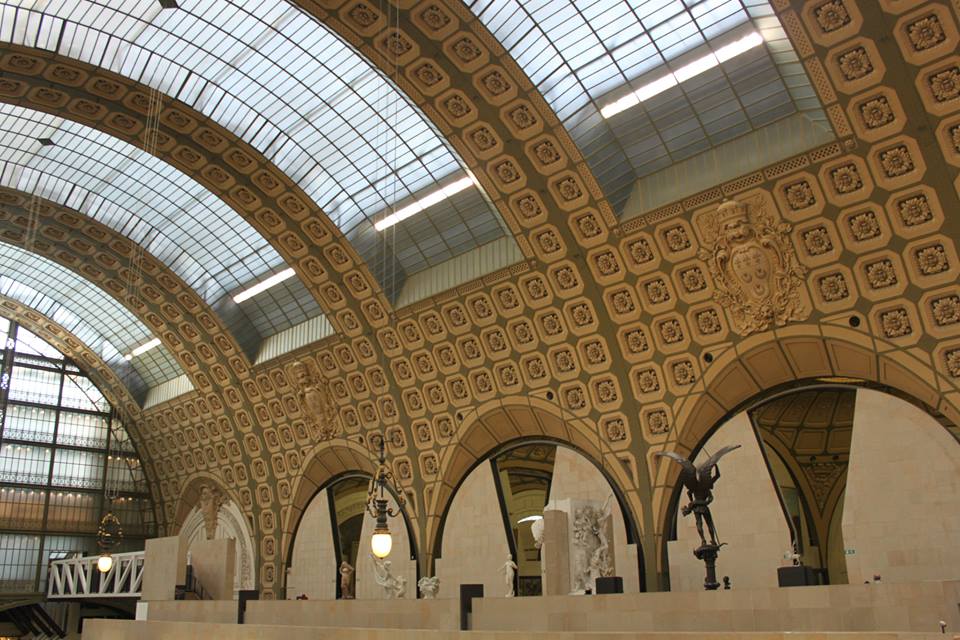 For our final day, we went to the Notre Dame. Probably the most imposing building I have ever seen, it was covered in gargoyles and little carvings of angels and devils - each cluster depicting a unique, terrifying story. Once inside, I was totally awestruck by the size of everything, the strong smell of burning frankincense and the sound of the organ reverberating off of the echoey arches. It was actually very humbling and peaceful. 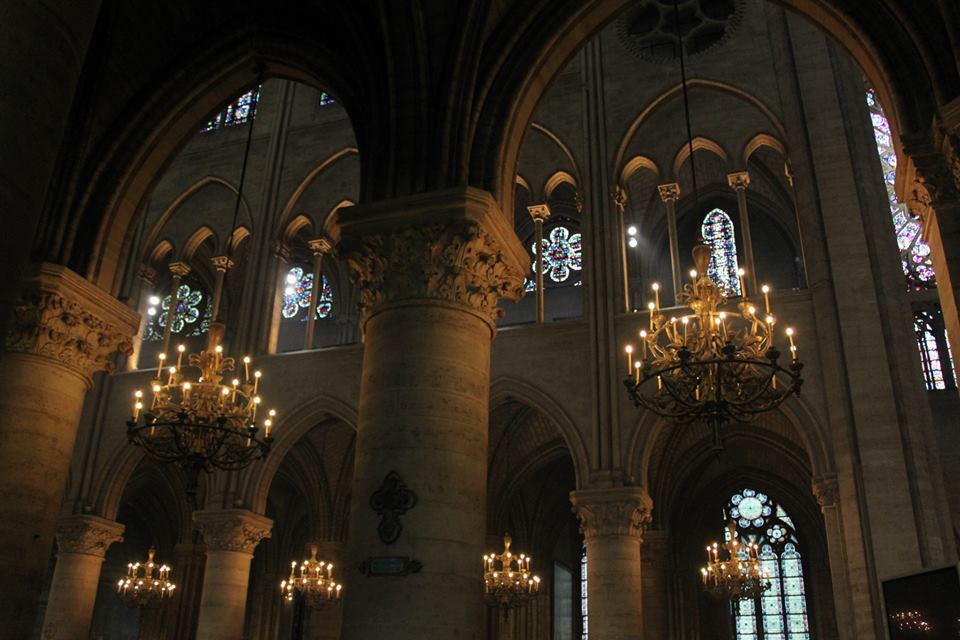 Next, we found a charming French restaurant in the Latin Quarter, called Le Centre Du Monde, where we got a three course meal for just 22 euros! I had escargots (snails), a steak, and a crème brûlée to finish, all washed down with a glass of red wine. Perfection. Needless to say, I left them a 5 star review on Trip Advisor as soon as I got internet. 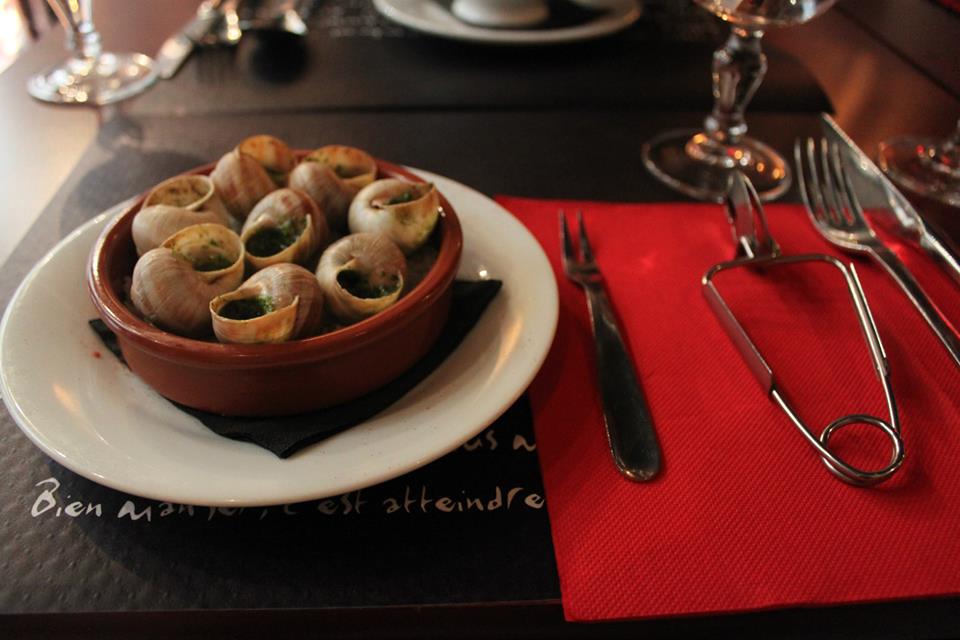 Before going back to the flat to pick up our stuff and get to the airport, we took a stroll over the famous love lock bridge or Pont des Arts. There were so many locks - some with sickeningly cheesey messages written on them, others quite cute and funny. The sun was still shining and the sound of a French female singer further along the bridge blew past with the breeze. It was the best way to end the perfect Parisian weekend away. 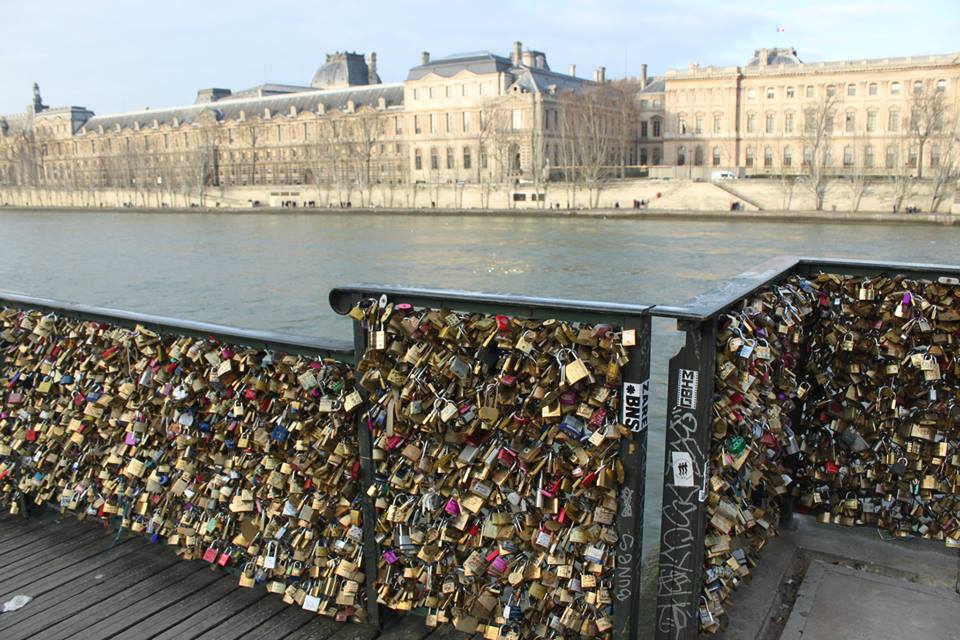 Has my trip inspired you? Check out our apartments in Paris