Apartment to rent in Cairns, Australia

Palm Cove is a beachside suburb just North of Cairns Australia. It is located 27 kilometres (17 miles) north of Cairns city. where you will find a unique, quiet and relaxing village by the sea where centuries old “paperbark” Melaleuca trees line the esplanade. This is a tropical paradise which provides for all of your needs and ensures your Palm Cove Stay will be one to remember in an atmosphere of relaxed sophistication. There are several Boutique Resort Apartments and Hotel Beachfront Apartments to ensure your Palm Cove Holiday is a memorable one. Many Apartments are self contained with others able to provide the 5 star hospitality on offer.

Geography
Palm Cove is located on the Australian Far North Coast. Arlington Reef is the closest section of The Great Barrier Reef to Palm Cove being around 30 km offshore. The reef shelters the inshore waters from the swells creating relatively calm waters between the reef and the beach. To the west of Palm Cove is the mountain range known as the Macalister Range.

History
The land that is today Palm Cove was bought by Albert Veivers who was responsible for having the first road built. The creation of the road led property values in Palm Cove to increase dramatically, leading to more prosperity for the community. Shortly after World War II, in which Palm Cove was used as a training base for Australian soldiers, the number of people traveling to Palm Cove greatly increased. The opening of a Resort in 1986 marked the first international hotel chain to be located in Palm Cove and the town has continued to increase in national and international recognition ever since. Palm Cove has a population of 2,059. as at 2016.

Public services
Due to the small size of Palm Cove, the community does not offer many public services of its own. Local Cairns Bus Services operate in and out of Palm Cove. The only method of direct transportation to Palm Cove is along the Main Motorway which stretches from Cairns in the south to north of Port Douglas. Palm Cove has no schools and children typically go to public or private schools in the surrounding suburbs. Palm Cove does have small shopping areas centrally located.

Tourism
The major industry for Palm Cove is tourism. Palm Cove is also a tourist destination due to its proximity to tourist areas such as Kuranda and Port Douglas. Palm Cove is the location of many world-renowned resorts and hotels such as the Drift Resort, Alamanda, the Mantra Amphora Resort, Peppers Beach Club, Sea Temple Resort, and the Reef House.

The pristine beaches and Palm tree lined paths are used by joggers, walkers and cyclists and netted life guard patrol swimming enclosures offer safe access to the sea all year round.The Palm cove jetty is one of the regions most popular fishing spots where anglers regularly catch species such as mackerel, Giant Trevally and shark.

Swim Course - 3.8km
Athletes will be required to complete the 1 lap course starting at Williams Esplanade, Palm Cove. The 3.8km course travels in an anti-clockwise direction and offers a stunning tropical and balmy swim.

Bike Course - 180km
Cyclists exit Transition 1 and head out onto Captain Cook Highway turning left heading south for 250m to the Southern turnaround before heading north. Note at the southern U turn IRONMAN athletes must merge across IRONMAN 70.3 athletes in order to make the turn. Athletes continue to Port Douglas, taking in the breathtaking views of the Pacific Ocean and tropical seaside rainforest that Tropical North Queensland is known for. Cyclists will head into the main streets of Port Douglas, where crowds will be cheering you on. The undulating, and winding course will take athletes past Thala Beach Resort and Hartley’s Croc Farm to the turnaround point, approximately 6km south of Wangetti, before heading back to Port Douglas. From the second turnaround point in Port Douglas, cyclists will follow the Captain Cook Highway Sth detouring through Smithfield before turning back onto Captain Cook highway and down into Cairns CBD and into Transition 2.

Things to do while staying in Palm Cove.

Flames of the Forest Dining Experience.

Half Day Trip to Green Island.

Simply relax on the Beach.

Outside this apartment in Cairns, Australia

This apartment is in a quiet area near the beach. It has a shared pool, a balcony, a barbecue, a children pool area and outside lighting. Car hire is not necessary as the apartment is less than a 15 minute walk to a large selection of shops, bars, restaurants; however parking is available if required.
Prices & availability 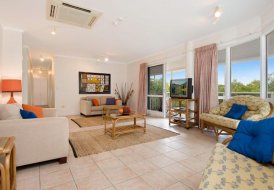 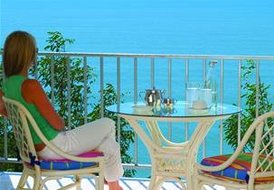 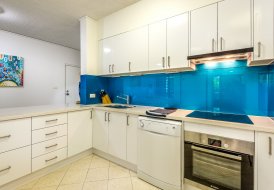 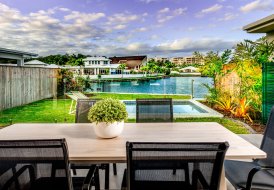 From £770 per week
Blue Lagoon Villa A
Villa
Sleeps 8, 3 Bedrooms 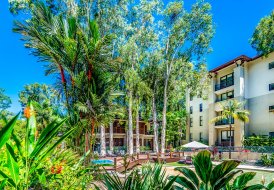 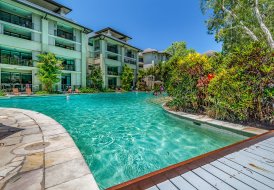 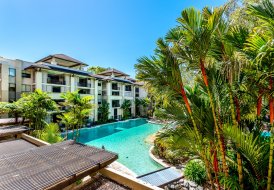 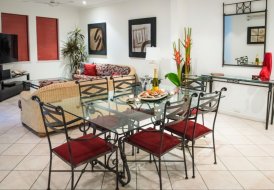 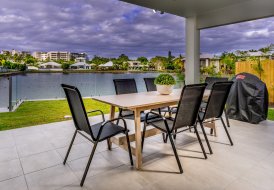 From £700 per week
Blue Lagoon Villa B
Villa
Sleeps 8, 3 Bedrooms
View all properties in Cairns
Add to wishlist Added to wishlist